For Heritage Open Day’s theme of Edible England, our heritage volunteers have researched and written a series of blogs exploring Brighton Dome and the city’s culinary links to the past.

On the morning of 12 August 1814, the bells of Brighton heralded the start of a memorable day. A festival would honour the Prince Regent’s birthday and celebrate the increasing expectation of peace following the defeat of Napoleon Bonaparte by the allied forces and his subsequent abdication and exile.

As soldiers gathered on the summit of Lewes Downs to fire a royal salute, wagons, carts and caravans packed with men, women and children dressed in their finest attire poured into the town. They were heading for the Prince’s cricketing ground to the north of the Level where more than 7,000 ‘poor and labouring people’ were to be guests at a celebratory banquet.

The cost of the feast was met by ‘the spirited inhabitants of the town’. £400 had been raised and included contributions from the MP for Sussex, Walter Burrell and £30 from the profits of one night at the theatre.

At the ground, 65 double rows of tables were laid, each set to accommodate 122 guests. In attendance on each table was a President supported by six stewards - five as carvers, one as tapster to serve drinks. The Presidents sported a white sash inscribed with ‘Brighton Festival’ and the stewards wore white and purple favours. 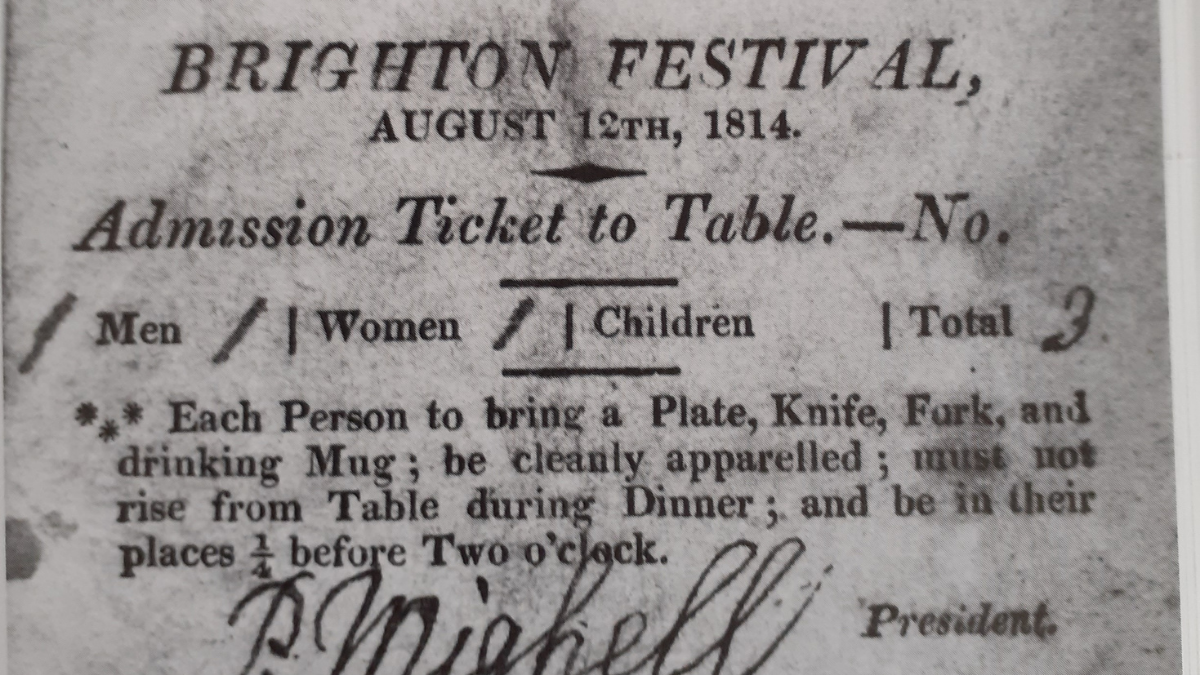 Guests had been issued with a ticket which directed them to bring their own plate, knife, fork and drinking mug; to be ‘cleanly apparelled’ and to be in their place at their designated table by 1.45 pm. At precisely 2pm, ‘everything being in complete order for the general attack with knives and forks’, a bugle sounded. A benediction was given by the vicar, Mr. Carr, and the serious matter of eating began.

The menu included three quarters of a pound of roast beef and half a pound of plum pudding, washed down with ale and brown stout. Each man was allocated a quart of beer, women a pint and children a half pint. As a precaution, the hogsheads of beer were secured in the rear of the President’s chair.

The lucky guests tucked into the dinner and thousands of spectators, estimated at upwards of 30,000, made their way to the venue to enjoy the spectacle and entertainment. Many ‘elegant equipages and fashionable pedestrians’ were to be seen with space made around the tables to allow a closer look and ‘hundreds of well-dressed spectators pressed forwards to solicit a taste of the roast beef’, of which there was more than enough.

A celebrated guest to the feast was Brighton’s oldest inhabitant, Phoebe Hessel, aged 99. The Sussex Advertiser observed that in her youthful days she must have been of ‘Amazonian frame’ as she had, so the newspaper informed, ‘served seven years as a private soldier in his Majesty’s 5th regiment of foot’. Phoebe received several presents in silver and pound notes from the crowd.

When the dinner ended, there was a series of rousing toasts and musical tunes were performed. You can listen to some of the music the guests would have enjoyed via this Spotify playlist, curated by our heritage volunteer.

Merriment ensued with guests forming squares and rings for dancing, others amused themselves with games such as blind-man’s-buff, jingling matches, foot-racing, stool-ball, kiss-in-the-ring and jumping in sacks. As the day came to a close, the happy throng, it was reported, joined hands and formed long chains to ‘thread the tailor’s needle’ to Castle Square where, after singing God Save the King, they dispersed in an orderly manner.

Sources: Assorted newspapers from British Newspaper Archive
History of Brighthemston; or, Brighton as I View it and Others Knew It by John Ackerson Erredge

Discover more heritage stories  and find out more about our future.