To celebrate Heritage Open Day 2021 theme of Edible England, our heritage volunteers have researched and written a series of blogs exploring Brighton Dome and the city’s culinary links to the past.

Marie-Antoine (Antonin) Carême (17834-1833) was a world-famous chef and one of the foremost figures in the development of haute or grande cuisine. In 1816, he was invited to work for the Prince Regent (later King George IV), as his Chef de Cuisine. Carême primarily worked at the Royal Pavilion in Brighton and left in 1817, having worked for the Prince for around nine months.

Generally considered to be the first international celebrity chef, his fame arose not only from his cooking but also his extensive writings about his marvellous creations and his experiences working for international royalty and the elite. After the French revolution, he preferred to be known as Antonin rather than Marie-Antoine.

He was renowned for his elaborate banquets, featuring ornate, architectural pièces montées or centrepieces, particularly his sculptures made from sugar and other confectionery.

Carême was born into a poor family and worked in kitchens from his early childhood in France. Aged 15, he trained under famed pâtissier Sylvain Bailly and was later hired by Charles-Maurice de Talleyrand, Napoleon’s head diplomat. Additionally, he worked for Napoleon himself; Tsar Alexander I of Russia; Lord Stewart, the British Ambassador in Vienna; Baron James Mayer de Rothschild; and Princess Catherine Bagration.

He is responsible for the development of French cuisine in the 19th century and influenced elements of cooking still used by chefs today. For instance, he is credited with creating the four ‘mother sauces’ including bechamel (later developed by Auguste Escoffier) and the introduction of a more rigid toque or chef’s hat. 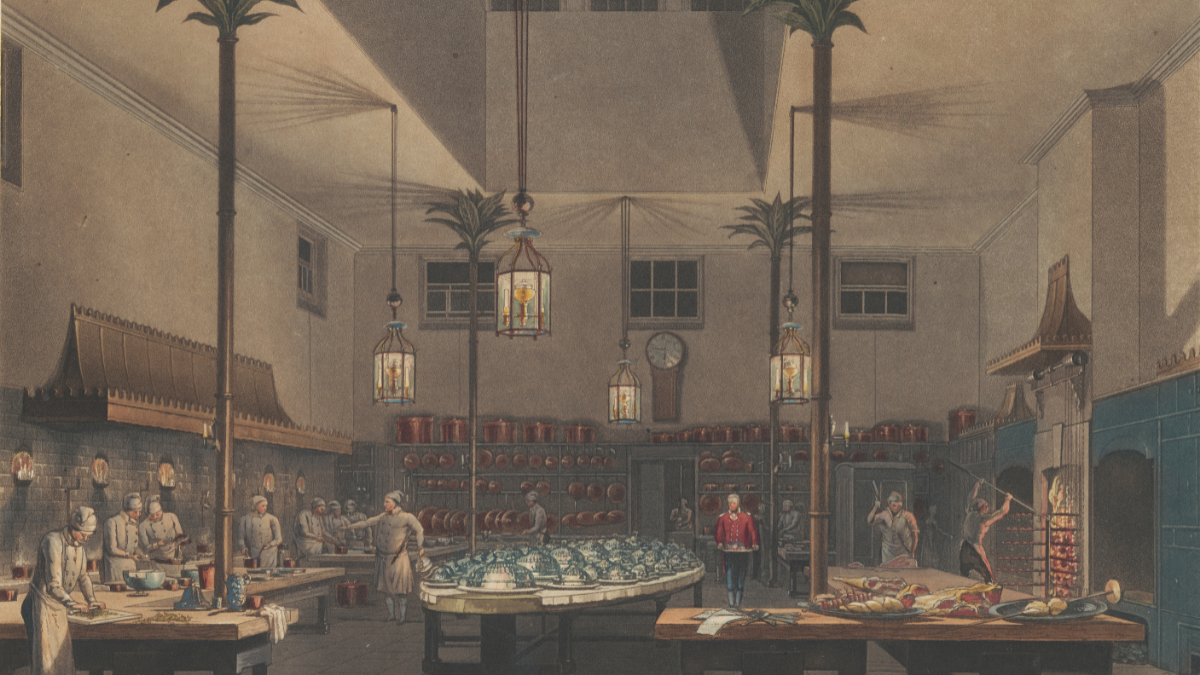 As one of the most sought-after chefs in the world, Carême was invited to England by the Prince Regent in the summer of 1816, to be his Chef de Cuisine. The Prince supposedly offered him an annual salary of £2,000 (equivalent to £199,379 today). For Carême this was undoubtedly an attractive opportunity.

The Prince was known for his lavish lifestyle. By 1795, his debts totalled £630,000, which in today’s money would be about £77 million. The Prince’s obesity was surely exacerbated when Carême came to work for him, with dinners that could feed hundreds, if not a thousand people. An average menu in 1817 might consist of anywhere between 24 and 40 entrées.

Aged 33, this was the first time that Carême had left France. In his book, Le Maître d’hotel français, he describes seeing the Royal Pavilion for the first time, considering himself lucky to be able to browse with leisure this beautiful residence.

The Pavilion’s Great Kitchen was one of the finest and most advanced of its time and Carême described it as being ‘of great beauty’. The middle steam table was large and oval-shaped and could accommodate a service of 40 starters. But Carême disliked how things were organised. He wrote that there would be two duty chefs, himself and another, and they would work alternate weeks. But when the second chef had a big dinner planned, Carême would have to create a menu for soups, grosses piéces and vegetable starters. Additionally, the head pastry chef would create a dessert menu. Therefore, three separate menus would be on-the-go and each chef would cook independently, which seemed disorganised and illogical to Carême.. He argued that as Chef de Cuisine, it would have made more sense for him to create a general menu to be delegated accordingly.

Carême decided to leave England in late 1817. There are several theories as to why, ranging from his dislike of the British weather, dissatisfaction with aspects of British cuisine, to troubled relations with workers in the kitchens and Pavilion Estate. Another likely reason for his departure was homesickness (maladie du pays). Carême summarises this feeling in Le Maître d’hotel francais:

‘But, how little did I know of the power of this sublime feeling of love for my country! At thirty-three years old I had left Paris for the first time, and finding myself in this foreign land, in the nebulous climate of England, I felt the painful ennui of no longer seeing my beautiful country; each day establishing new differences between the two countries, so close and yet so foreign to each other, I experienced this disease of the soul (which is commonly called homesickness) which irritates all intellectual faculties: However, I had nothing to desire in the Prince’s house.’

Although his time working for the Prince Regent was short, it allowed him to develop his ideas and creative genius, advancing his reputation as one of, if not the best chef in the world.