It’s not just Brighton Dome’s past residents, artists and events that have an interesting history, even the lights have a story to tell!

When Brighton Council bought the Pavilion in 1850, like many rentals today, it came unfurnished; Queen Victoria had removed nearly all of its furnishings, using them to redecorate at Windsor Castle, Buckingham Palace and Kensington Palace.

In order to help pay for restorations the town decided, in true Brighton fashion to throw a party; a ball was arranged in 1851 to celebrate the town’s acquisition and help raise further funds, held in rooms in the Royal Pavilion that had already been refurbished.

Of course, it wouldn’t have been a proper ball without chandeliers! Apsley Pellatt & Co. of London were commissioned to create fitting illumination for the Pavilion in time for the inaugural ball - these chandeliers featured hundreds of tiny glass droplets which refracted the light beautifully. 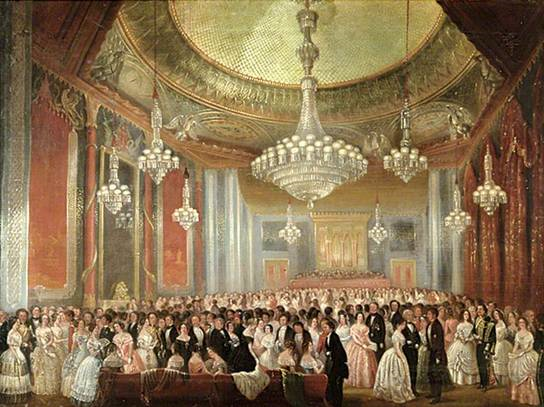 In 1864 however, Queen Victoria kindly decided to return a number of items to the Pavilion, including the original Music Room chandeliers, sadly making the newly made Apsley chandeliers surplus to requirements. When the decision was made in 1866 to convert the stables in to The Assembly Rooms, parts of the Apsley chandeliers were recycled for use in what we now know as Brighton Dome.

The Assembly Rooms opened the public in 1867, it had undergone refurbishment by Phillip Lockwood, including the installation of 9 chandeliers. Eight small gas fired chandeliers adorned the balcony while one magnificent chandelier hung in the centre of the roof. It measured 26’6” in height and 14ft in diameter. With over 520 gas jets the chandelier was very expensive to light and in 1886 the chandelier was converted in to an early hybrid by Magnus Volk to use electricity alongside gas. In 1888 the central chandelier was taken down, we believe because of the expensive running costs. However following complaints from customers that the room was now too dim parts of the chandelier were re-hung!

In 1900 the chandelier was re-hung in our Concert Hall in the hope it would help strengthen the roof, but its return was short lived. In 1934 Brighton Dome was refurbished again, this time to the Art Deco designs of Robert Atkinson. Atkinson felt the chandeliers did not complement his design and the lowered ceiling would not have accommodated the vast chandelier and so once more the chandeliers came down, this time for good. 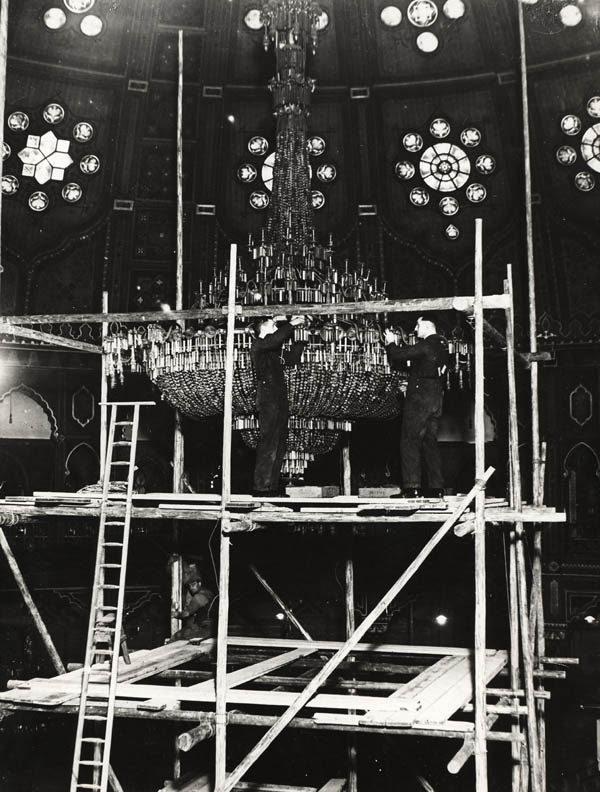 Many of the glass droplets were reused in chandeliers for the Royal Pavilion including those in the Saloon, Kings Apartments and Adelaide Tea Rooms. On an open day a few years ago, one of the visitors told us that her grandfather had worked on the 1934 refurbishment and each of the builders had been given a glass droplet as a souvenir.

With thanks to Gordon Grant from the Royal Pavilion for helping us to unravel the mystery!