Between 1 December 1914 and 15 February 1916 over 4,000 wounded Indian soldiers were nursed back to health at the make-shift hospitals set up inside the buildings of the Royal Pavilion estate. Three operating theatres were installed, one inside Brighton Dome itself. The India Gate, completed in 1921 and visible on the south side of the Pavilion Gardens, was a gift from the people of India, erected to commemorate their fallen soldiers. 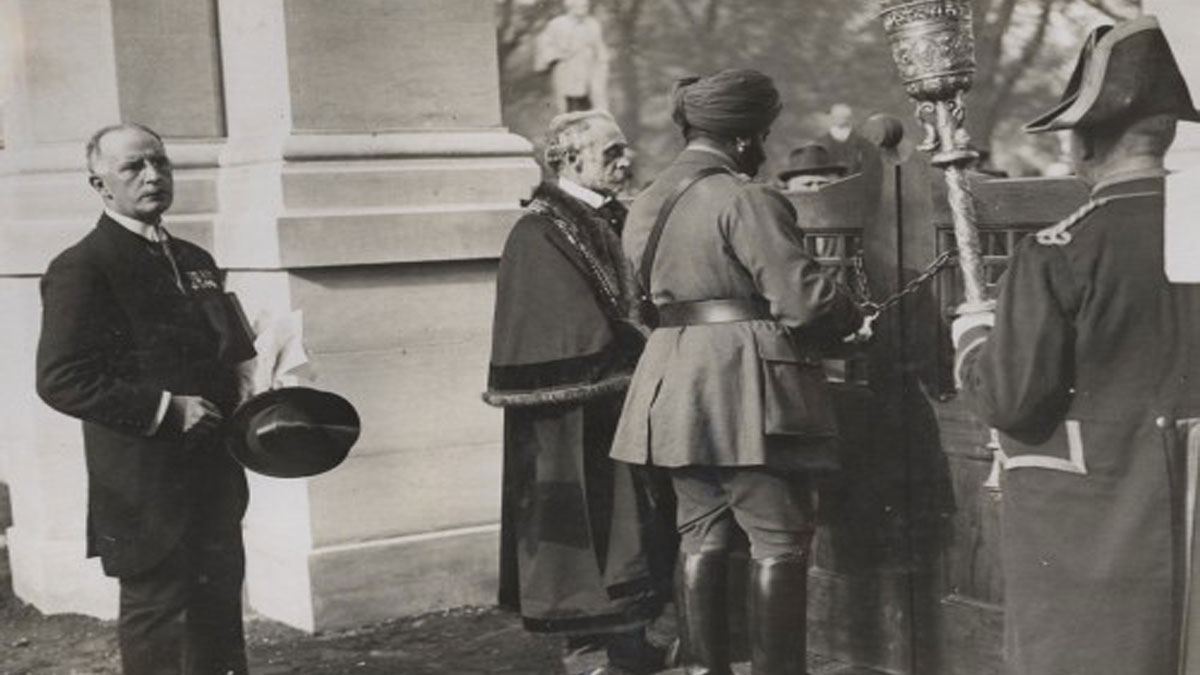 In a night raid in September 1943, thousands of incendiary bombs were dropped on Brighton. One bomb fell in Pavilion Gardens, between the Royal Pavilion and Brighton Dome. Luckily, due to heavy autumn rain, the bomb buried itself deep in the soft earth before detonating. The shock waves were absorbed below ground level, limiting damage to the buildings, though the impact was still strong enough to shake the Dome walls out of vertical. The explosion left behind a huge crater, which was then put to use as a static water tank.

Dome Dancing was a programme held between 1940 and 1946 for the local and allied soldiers of WW2. From 1942, Dome Dancing Forces Dance Club was opened, offering free dancing lessons twice a week for members of the Forces. As well as regular dances on a Saturday night for entertainment, there were special dances and events held such as for Canadian Dominion Day and New Year's Eve, as well as the Duchess of Norfolk's Regency Ball in aid of the Red Cross Prisoners of War Parcel Fund (with this event raising £10,000). 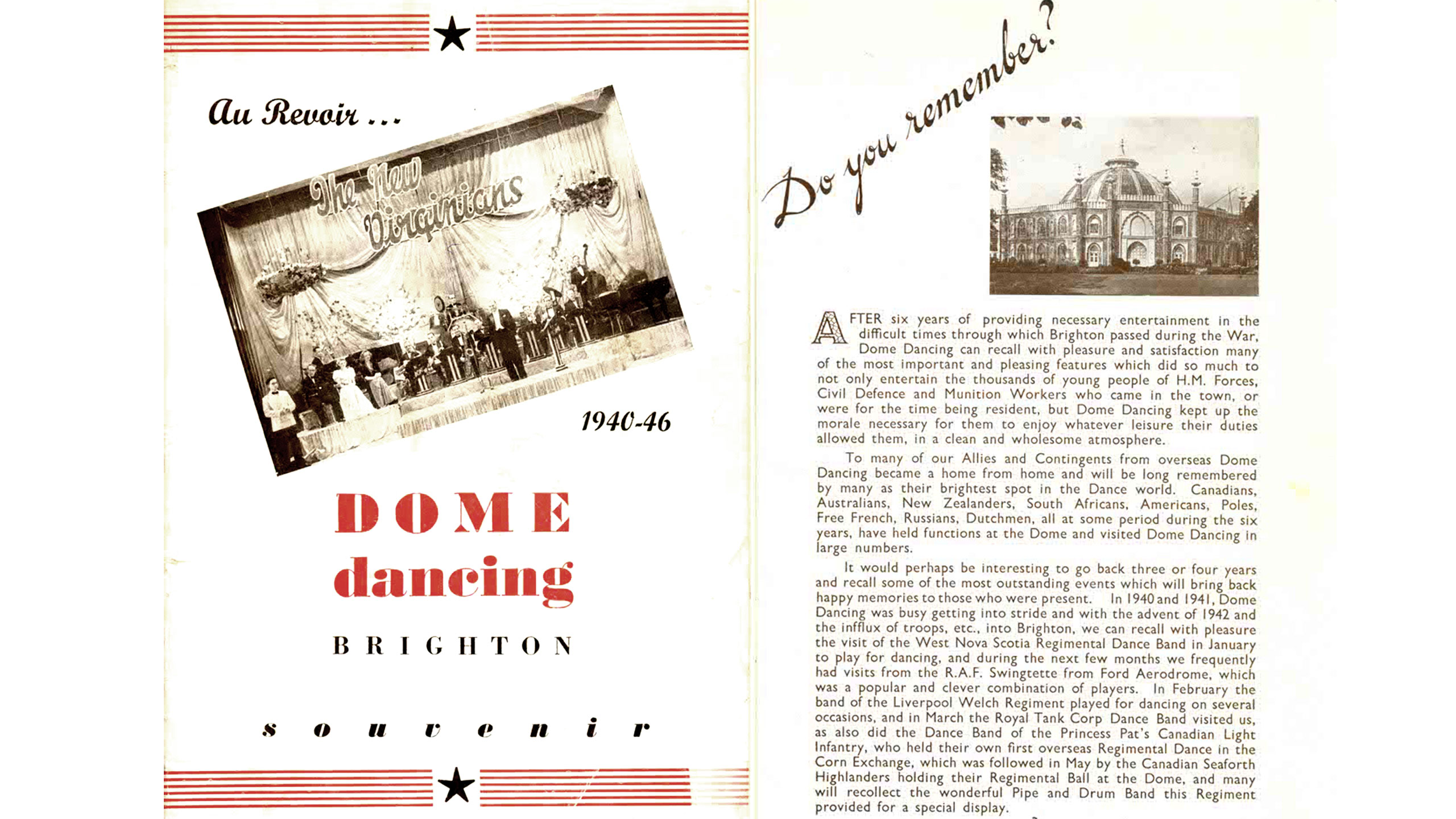 Brighton was also home to numerous allied soldiers during WWII and many attended dances held in the venue:

‘During the war years the highlight of the day was looking forward to dancing at Brighton Dome in the evening. I actually met my future husband, an Australian Lancaster pilot, there in 1944 as did many other local girls. We settled back in Brighton in 1947 and spent 44 wonderful years together thanks to Brighton Dome.’ Mrs Joy Bradshaw

Letters were discovered in both whole pages and in fragments, by workers during redevelopment works at Brighton Dome and Corn Exchange, September 2017. They give a fascinating glimpse of what life was like for the soldiers hospitalised at the Royal Pavilion Estate, a make-shift hospital during WW1.

One letter, dated 20 April 1918 from JC Cocks a patient at Queen Marys Hospital, Roehampton, to his friend Brown a patient at the Pavilion hospital: ‘I dare say you are expecting a letter from me as to how they are treating me at the above. Well it is not too bad here at all, it is a little out of the way, we find this especially so in bad weather as amusements are not next door to the hospital as at the pavilion. I am being fitted with a [illegible] arm (a French make) it is very light in weight and will suit my purpose very well. I don’t think this arm is suitable for manual labour & what I have seen of the arms I should think a Anderson + Whitelaws would suit you’ 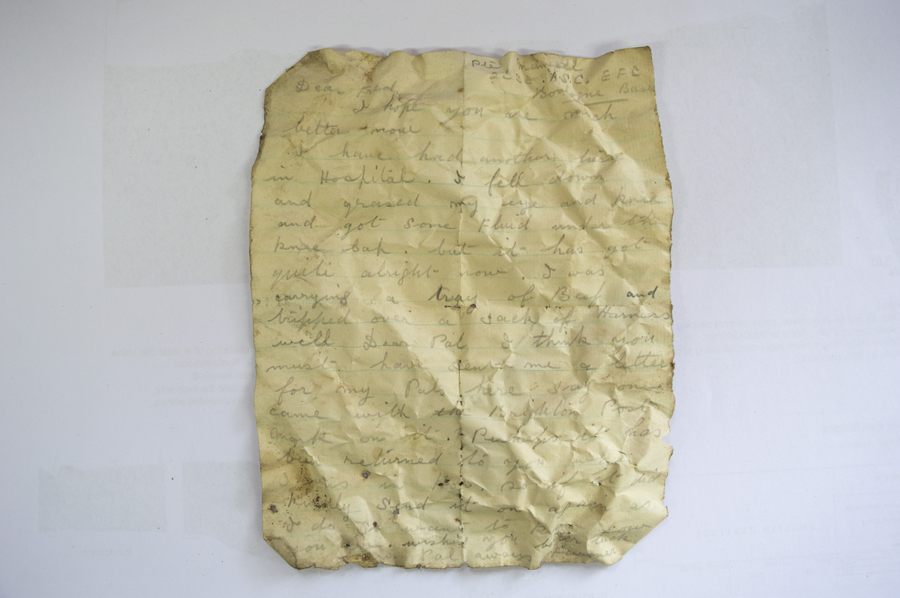 A third letter (torn into fragments) dated 25 August 1918 was addressed to ‘My Dear May’ from a patient in ‘Section D 120, The Pavilion, Brighton’ 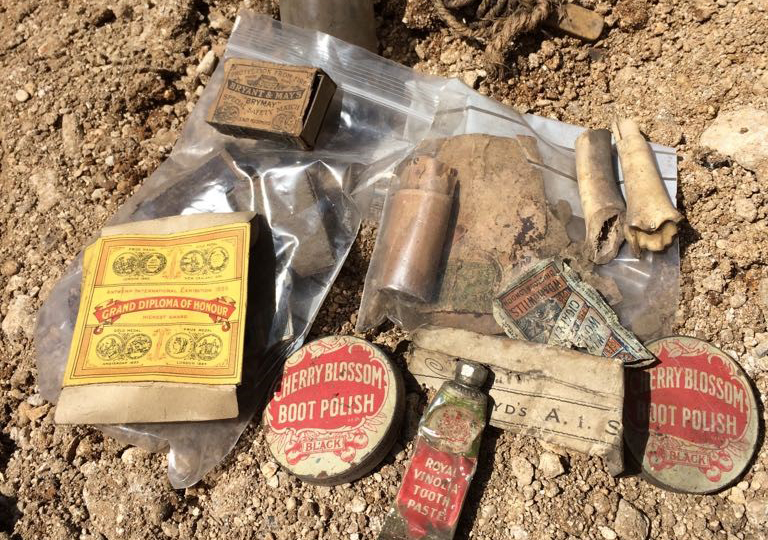 Michael Shapland, Historic Building Specialist at Archaeology South East says ‘The letters came from behind the rear cladding to the timber frame of the Corn Exchange, rather than from within the timber frame. Essentially, the letters could only have got there by being dropped from above into a narrow void behind the Corn Exchange hall, rather than being inserted at ground level from within the hall itself.

The interesting thing about this context is the presence of a skylight precisely above where the letters, together with the other ephemera, would have been dropped. We can therefore begin to tell a little story here, whereby soldiers packed into the busy infirmary ward itself would have snuck off to quiet corners of the building (such as the roof-space) to have a fag and read their letters in peace, in the light provided by the skylight.’

Find out more about other recent discoveries found at Brighton Dome.