Our regular SPECTRUM series in association with Resident is back in full force bringing you the freshest talent from all corners of Brighton’s vibrant music scene.

See More from Series
2016
Past Events
More from SPECTRUM

Our regular SPECTRUM series in association with Resident is back in full force bringing you the freshest talent from all corners of Brighton's vibrant music scene. Don't miss our day-long SPECTRUM special for Record Store Day 2016 - it was a huge success last year with no less than 18 acts.

Enjoy a morning seminar, followed by record shopping at Resident and the best of local music at Brighton Dome Studio Theatre. This year, we'll also have the addition of a Record Crèche to keep your Resident purchases safe while you enjoy yourselves.

It's going to be a gorgeous cavalcade of unique styles, sounds & vibes...

TIGERCUB
Tigercub’s newest release, Repressed Semantics (out now via VENN Records) is blend of of isolation, aggression and tranquillity. The lead track, ‘Pictures Of You,’ has seen praise from the likes of Annie Mac and Daniel P. Carter on their respective BBC Radio 1 shows, as well as support from the Guardian & DIY, and many more. Tigercub have recently finished a packed headline tour.

GANG
"a sludgey-as-hell trio from Brighton… somewhere between the dark side of Dinosaur Jr and a weary Black Sabbath.” NME. Having since won acclaim from the likes of BBC Introducing’s Record Of The Week, multiple plays from 6Music’s Marc Riley, NME’s Band Of the Day, DIY Magazine and more, Gang recently featured on Conor Oberst’s Team Love Records / Sexx Tapes collaborative cassette release, Margate, Kent vs New Paltz, New York.

YUMI AND THE WEATHER
Yumi And The Weather is the ethereal guitar-electronica & rhythmically led pop of Ruby Taylor, a veteran of the South Coast's alternative music scene. She has previously put out 2 EPs on XVI Records to great acclaim, including superb remixes from Ambassadeurs, Manni Dee, Vondlepark & Kiwi and supported by the likes of Clash Music, Stamp The Wax and Noisey. 2016 see’s Yumi making waves on the live circuit and releasing an array of singles in the build up to her debut album.

CALICO
Combining live instruments with a backbone of electronic wandering, Calico bring elements of jazz, electronica, folk, rock and classical to their unique live mix, all filtered through the brain of an insane robotic overlord.

VIA TIRANA
Via Tirana is a grunge-kraut-electronica band from Brighton. They mix repetitive and minimal electronic drum loops with angular guitar riffs, pulsating bass lines, dissonant synth leads and catchy melodic pop-grunge vocals. They have their own sound and drew influence from variety of genres, including bands like LCD Soundsystem, Nirvana, Shellac, Sleigh Bells, Sonic Youth, Suuns and TRAAMS.

CATHERINE IRETON
Catherine Ireton's sound is soaring honeyed vocals over simple piano with playful, thoughtful lyrics. As an artist she is interested in the everyday and her songs will effortlessly take you from an airport departure lounge, to a hidden cupboard, to the inner workings of the synapses of your brain. Former lead vocalist of God Help the Girl (Belle and Sebastian) she has recently toured her own music to Seoul and Hong Kong.

DELLA LUPA
Della Lupa is a Brighton based act created by Steph Brown. Whilst just managing to straddle the pop genre Della Lupa’s truly unique fusion has been thought to contain a neo classical style, with hints of Steph Brown’s past influences of Jazz and Eastern melody. With the a depth and intelligence to the lyrical content each individual song speaks out to it’s audience making the performance a captivating inclusive and electric experience.

BARNACLES
Barnacles : A horn heavy, groove based quintet combining the energy and intensity of dance music with the spontaneity and freedom of a live group. Drums, baritone sax, trombone and two tenor saxes journey into the mind of band leader, composer and saxophonist Leroy Horns. Barnacles have recently finished their first studio album and hope to release it soon.

BUZZ HOLLY
A group of musicians living life and gigging by the seaside. They met at college many moons ago but jammed together last summer and went on to form what is now known as Buzz Holly. Taking the punk rock ethic as a musical philosophy the buzz have through time and repetition tapped into their own rainbow of melodic fuzzed up grunge which is aimed for big singalongs and partying like you just got out of Oz.

BOBBIE JOHNSON
It is always assumed that modern hip hop is a male dominated, swagger-centric pissing contest. Who owns more, who has a bigger car or crew. Conscious thought and social commentary replaced with the antithesis of the Four Elements. What proves to be a refreshing crosswind, then, is Bobbie Johnson; a fresh droplet in a stagnating pond, a new battery, allowing hip hop to recharge and re-energise. Using both a very British sensibility with her lyrics and her own voice, there’s familiarity, homeliness, realness. These are modern stories for modern ears.

UNDERHOUND
Underhound are a Sussex based duo, performing original indie folk with hints of jazz and blues. Featuring acoustic guitar, vocals, and double bass, they play original upbeat songs with an infectious groove!

MERLIN TONTO
Formed in 2013, Merlin Tonto (Owen Thomas (electronics), Miles Boyd (bass) and Stefan Eliades (drums) combine a patient, ever building, subliminal connection in the rhythm section with Owen's virtuoso manipulation of electronics and visual interpretations of the band's otherworldly sounds. Recalling at various times Factory Floor, ESG and Leftfield. It's all done in their idiosyncratic way, the music is never in a hurry to get anywhere, their restraint meaning the joy is as much in the journey as the destination.

LUCAS AND KING
Lucas and King are a truly exciting new young duo emerging from the SouthEast. Songs of exceptional craft and depth pull influence from classic folk and American roots flavours, delivered with the spine-tingling, unforgettable voice of Bo Lucas and perfectly judged guitar accompaniment from Hayleigh King.

JESSICA BISHOP
Jessica’s enchanting vocals and emotive & well-crafted songs offer a fresh take on the singer/songwriter, with a variety of influences including Joni Mitchell, Massive Attack and Fairport Convention. Her Track ‘Keep on running’ has been picked as BBC Introducing’s track of the day twice already this year. This song along with her latest single “Naked Afternoon’ are taken from her debut album recorded at the legendary Rockfield Studios Produced by Max Rafferty and Nick Brine (Bruce Springsteen, Seasick Steve,Stone roses). The album is due for release this summer.

Seminar
Chair - Phil Nelson
Join Phil Nelson (Head of Business, BIMM) with a host of industry professionals and creatives. This seminar will explore alternative approaches to a career in music and getting gigs Vs the traditional routes.

Find out more about the panelist line up here

Thanks to The Pebble Trust & Rampion Offshore Wind for their support.

SPECTRUM is supported by The Pebble Trust 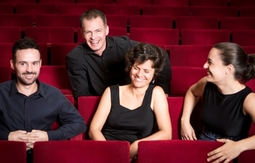