5 minutes with... Asian Dub Foundation's Steve Savale on their live score for THX 1138

This October, retaining much of Lalo Schiffrin’s distinctive score and soundtrack, Asian Dub Foundation create a memorable live experience to George Lucas’ 1971 cult, sci-fi chilling dystopian fantasy, where mood-stabilising drugs are mandatory, sex is prohibited, and a young Robert Duval rages against the system. We caught up with Steve ‘Chandrasonic’ Savale of Asian Dub Foundation to find out more.

It’s an incredibly iconic soundtrack – what prompted ADF to re-interpret it?

We’ve always been big Sci-Fi fans and I remembered that there was a lot of sonic space in it and so it might work as a re-score.

When did you discover the film and why are you fans? How does the film’s messages resonate in today’s society?

What's great about is that it’s become more prophetic as time has passed. There was a lot of criticism of it for a while as being too impenetrable, too alien. I first watched it on a film series called Moviedrome presented by Alex Cox who made this critique. This was never a problem for me .I thought that Lucas and Murchs' stated intention to make what they called an Artifact from the Future which would be unfathomable to a viewer from 500 years in the past was a brilliant idea. The film’s impenetrability made it more believable as possible future. But when I watched it again after 25 years this was no longer the case: THE FILM HAD BECOME VERY RECOGNISABLE! Incessant, over-whelming digital bleeps and squelches, out of control consumerism, mass surveillance, fundamentalist religion, desensitisation to violence....sound familiar?

Perhaps the most frightening bit of prophecy for me is the kids with syringes permanently stuck in their arms. Ritalin and "ADHD" springs to mind. Walter Murch, after he saw our show said when one of the characters says, "This is not a race issue" he found that uncomfortably prophetic given the way organisations like Fox News have dealt with the spate of Police killings of unarmed Afro-Americans. Additionally the reduction of black people to the status of entertainment holograms in the world of THX is an incredible and chilling form of futuristic racism quite unlike anything I've seen in Sci-Fi before. I could go on for a while here! 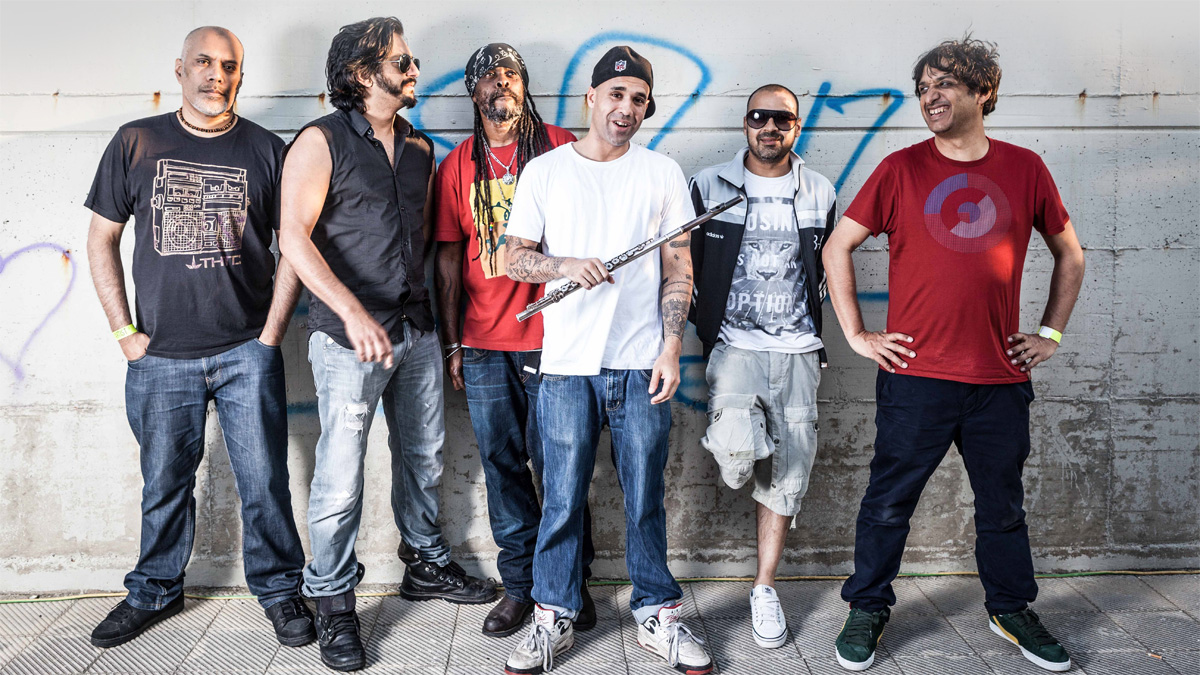 Creating a live soundtrack is a huge and complex task - where do you begin? Do you split the film into segments and work on them as a band, or do individual members tackle the entire thing?

There’s a lot of methods. Mostly we work on ideas together as a band and yes it is quite a segmented process. It’s great to find, as we did with two tracks, that something you’ve done before works well with the film. Cyberabad from our 4th album was exactly the sound of ADF doing THX - the sound of a grinding industrial, claustrophobic future city in India.

You’re no stranger to performing live soundtracks – you’ve tackled both La Haine and The Battle of Algiers in the past (the latter premiered at Brighton Dome) – what is it about this medium that excites you and keeps you coming back for more?

I realised for me personally I’m trying to recreate the feeling I had when I was 11 and went on a school visit to Rank Studios where I saw a live soundtrack was being dubbed to a horror film. It takes you to some very interesting places as composers.

Are there any themes within these three films that resonate particularly with ADF as a band?

There are a handful of songs we wrote over the years that have echoes in the themes of the film. La Haine - youth vs. police was a strong film on our first two albums. Battle of Algiers - the theme of colonial wars ran through our 4th and 5th albums especially with regard to Iraq, which even the Pentagon thought had parallels in the film (they showed it!!). THX 1138 - tracks like Memory War, Truth Hides, Cyberabad all have an Orwellian, future totalitarianism feel that connects with THX.

Lalo Schifrin did the original soundtrack. Are you fans of his? How does his original work influence your take on the music? There must be a certain sense of trepidation when approaching something so revered?

An absolute genius and I’m happy to say a formative influence on me. When I was 7/8 years old I recorded his theme to the first season of Starsky and Hutch (very different from the more well-known later one) on my portable cassette recorder and couldn’t stop playing it. It is the most brutally exciting bit of drum n’ brass ever made, and sadly there isn’t a decent recording of it other than “off the TV” versions. Schifrin’s music is mean, sinister, orchestrated funk with a forward propulsion of a bullet train. Again, as a child I bought his disco-suspense version of Jaws - one of the best two-note baselines ever put down on vinyl. If you ain’t heard it, check it now on YouTube (search ‘Lalo Schifrin - Jaws‘). And of course, everyone knows Mission Impossible. The fact that he personally gave us permission to do this project is unbelievable. His music on THX is very different to his usual monster grooves though, it’s more avant-garde classical which just shows the guy’s incredible range.

How does the process differ between creating a live music score to writing a normal studio album?

The big difference is that there is something external guiding you, even dictating how you play i.e. the film… and it’s something you can’t alter and had nothing to do with its initial creation. It makes for interesting limitations that always spur different directions.

In addition to this, how does the live experience differ from your typical (if there is such a thing!) ADF concert?

It’s the direct opposite because we are not the centre of the audience’s visual attention.

What is your favourite part of the soundtrack to perform and why?

Dr. Das - The conversation in Sen’s apartment on which we do a very dark but classic dub jam.

Brian Fairbairn- The very end moment (I won’t spoil it for you).

Steve ‘Chandrasonic’ Savale - Where THX is examined by robotic arms and measured by weird meters. A week before the initial offer for a new live soundtrack came through I’d written a piece inspired by a scene in Winter Soldier where Captain America discovers a that an old Nazi has downloaded his conciousness into a vintage IBM machine. It worked so well for the THX scene and kicked the whole thing off.

Likewise, what is your favourite part of the film and why?

The whole band felt that it was difficult to prise a scene out of the whole film, that it all rolls into one. Definitely a strength.

You’re still touring the La Haine live show almost 15 years since you debuted it. Are you surprised by its success and what do you think it is about that show in particular that seems to speak to so many different audiences?

It was definitely one of the first live re-scores, and no one had attempted to do a film like that before. Still now most people play safe and re-score silent films. I haven’t seen anything like it since. The soundtrack which we haven’t changed, sounds idiosyncratic but still tough. Other than that I don’t know so yes I’m surprised

You’ve performed in Brighton several times over the years. What memories do you have of the city?

I have a deep subliminal yearning to be in Brighton. When I was 8 my father had the offer to be a site electrician on the Brighton Marina, so I thought we were going to move there and I was dead excited. Beach! Rides! Amusement arcades! Sadly didn’t happen so it’s an unrequited love for me.

Continue Reading
close
Help us continue doing what we do best