As part of our partnership in the 5G Festival project, we hosted the latest technical trial at Brighton Dome and invited a live, public audience to get their feedback ahead of the final showcase next March.

5G Festival is part of efforts across the music sector to create innovative platforms for musicians and artists to write, rehearse and perform music despite geographical barriers, and deliver new, uniquely engaging ways for audiences to watch live performances.

The November trial focused on testing the remaining key technical barriers of audio and video delay, with musicians performing both on our Concert Hall stage and in the basement Band Room. 70 miles away at Metropolis Studios in London, a drummer played using augmented reality (AR) glasses, which allowed him to hear and take visual cues from other band members and perform seamlessly as if they were all together on the same stage. 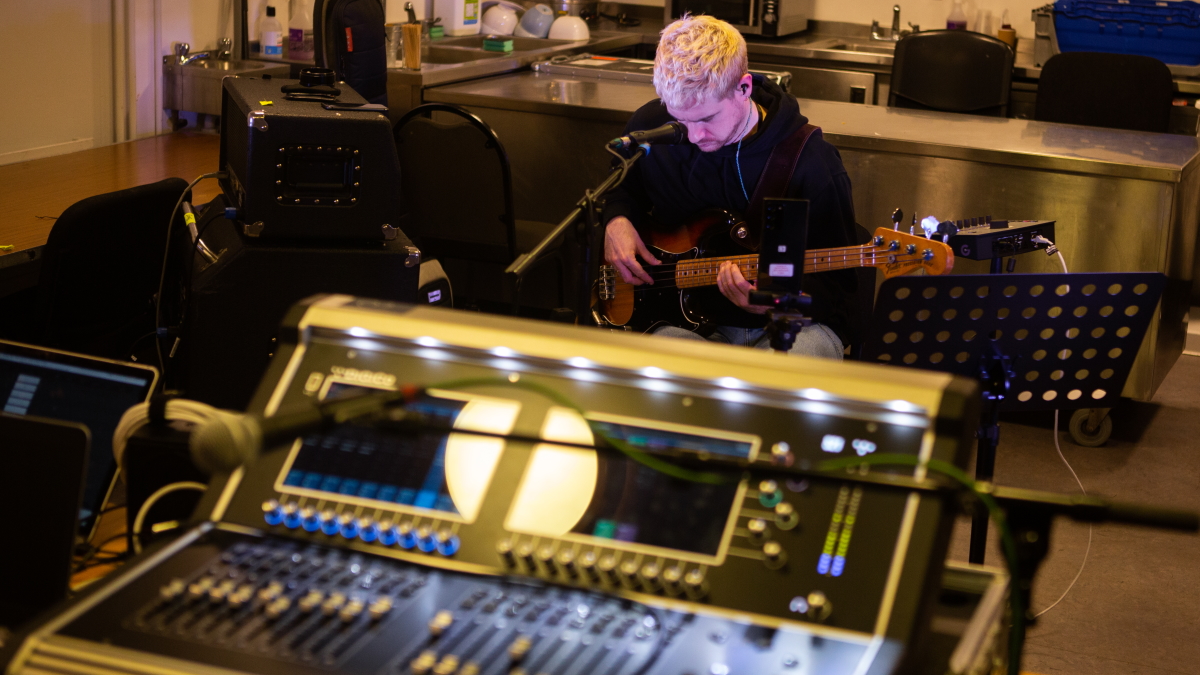 “For us, the 5G Festival is about exploring how artists engaging with new and emerging technologies supported by 5G can collaborate wherever they are and provide unique and memorable experiences for audiences in-venue and at-home. We are at the beginning of this exploration, but the potential for venues and festivals to present immersive hybrid and remote events is huge, especially when the network allows for real-time international collaboration.”

In Brighton, the new and emerging technology of spatial sound was used to create a “virtual festival” experience to transport the audience member from the Founders Room to the centre of the Concert Hall. The trial also tested the hybrid audience experience, by using multiple video streams to allow Concert Hall audience members to watch the musicians perform from their various locations.

Vocalist and songwriter J Appiah described the experience as “really seamless, there’s no latency of audio…it’s like a great alternative to actually getting in a room with a band.”

Find out more in the video below:

A potential benefit of the technology will allow artists to collaborate without travelling. Local venues, such as those in Brighton would be able to host immersive live streams of concerts, allowing audiences to have as near to the live experience as possible but without having to travel to remote locations. This has significant sustainability credentials and the added advantage of boosting local visitor economies.

“I love live music, that will never be replaced, but I think the experience can be enhanced through technology as well and I think that’s where there’s a lot of possibilities.”

The final project showcase will take place on 3 March 2022 at Brighton Dome, online and with other partner venues, more details will be announced in the new year.