In August 2019, 39 concert tickets dating from 1901-1903 came up for auction at Brighton and Hove General Auctions in Woodingdean. They were discovered, along with six Edwardian era ‘Snap’ cards, under the floorboards during a local house clearance. The tickets are for a variety of events at Brighton Dome and the Music Room at the Royal Pavilion and reveal the types of events that were popular at the turn of the 20th century and the audiences who would have attended the shows. The majority of the tickets were for a concert given by the renowned opera singer Adelina Patti held at Brighton Dome on Saturday 23 November 1901. 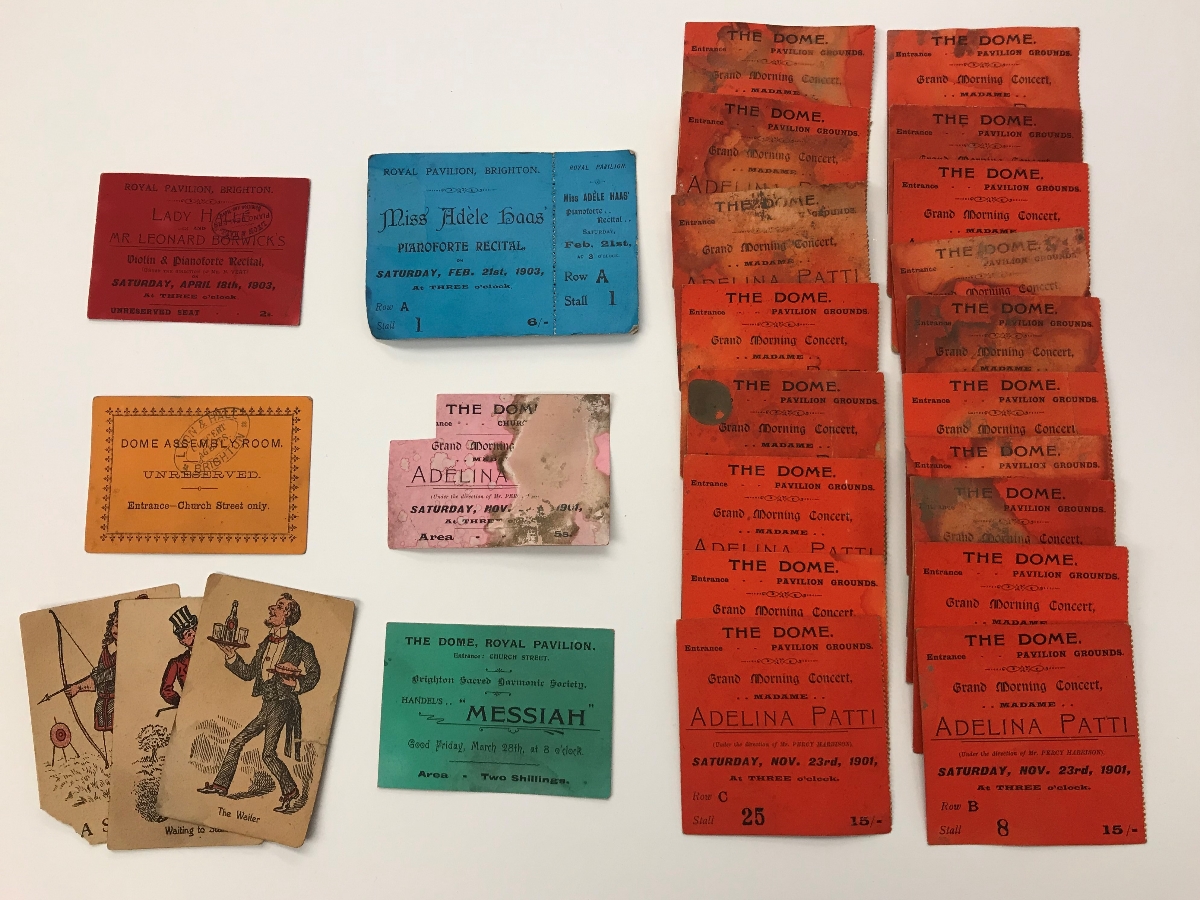 Adelina Patti, along with her contemporary Jenny Lind, was one of the most famous opera singers of all time. The purity and beauty of her lyrical voice and the unmatched quality of her bel canto technique, made her a huge celebrity in the late 19th and early 20th centuries. The composer Giuseppe Verdi, writing in 1877, described her as being ‘perhaps the finest singer who had ever lived’.

Born into an Italian family of opera singers, Patti sang professionally from childhood and developed into a coloratura soprano. After the family moved to the United States, Patti made her operatic debut at the age of 16 in 1859 at the Academy of Music, New York. In 1861, at the age of 18, she received her first invite to perform at Covent Garden. Her remarkable success in London enabled her to tour Europe, where she triumphed in her role as Amina in Bellini’s La Sonnambula. 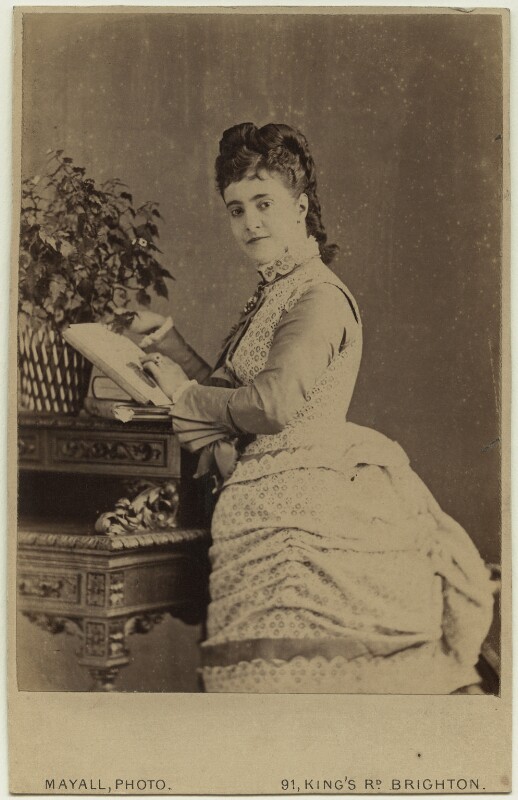 She remained on tour almost continuously for 20 years, including visits to South America and the West Indies, becoming an international superstar. Her fame even led to mentions in contemporary literature such as Tolstoy’s Anna Karenina (1878) and Oscar Wilde’s The Picture of Dorian Gray (1890). As a young woman, Patti possessed a warm high soprano voice and remarkable flexibility which suited her choice of comedic roles. However, as Giuseppe Verdi noted in 1878, her lower notes gained fullness as she grew older, enabling her to excel in weightier operatic roles such as Gilda in Verdi’s Rigoletto and Zerlina in Mozart’s Don Giovanni.

Patti was also gaining a reputation for being a fearless businesswoman, demanding to be paid $5000 a night, in gold, before her performances. Her contracts stipulated that her name was on the top of the bill and printed larger than any other name in the cast. Her contracts also insisted that while she was ‘free to attend all rehearsals, she was not obligated to attend any’. In his memoirs, the famous opera promoter James Henry Mapleson recalled that Patti had trained her pet parrot to shriek ‘CASH CASH!’ whenever he walked into her dressing room. Patti’s private life (she was married three times), her close friendships with members of European royalty and her legendary jewellery collection made her the talk of society.

Patti performed in Brighton for the first time in 1861, at the age of just 18, in a concert at the Town Hall. The concert was arranged by Wilhelm Kuhe, a German-born pianist, who had gained renown as a composer and promoter of concerts. He established a series of music events across Brighton and his connections in London meant that he could invite acclaimed musicians to perform.

She went on to perform in Brighton on numerous occasions throughout the latter half of the 19th century and she became such a sensation that late trains to Worthing and Haywards Heath had to be specially arranged for audience members to get home. Patti took her last curtain call at Brighton Dome in November 1906, although her final appearance in Brighton was at the Theatre Royal in 1908. 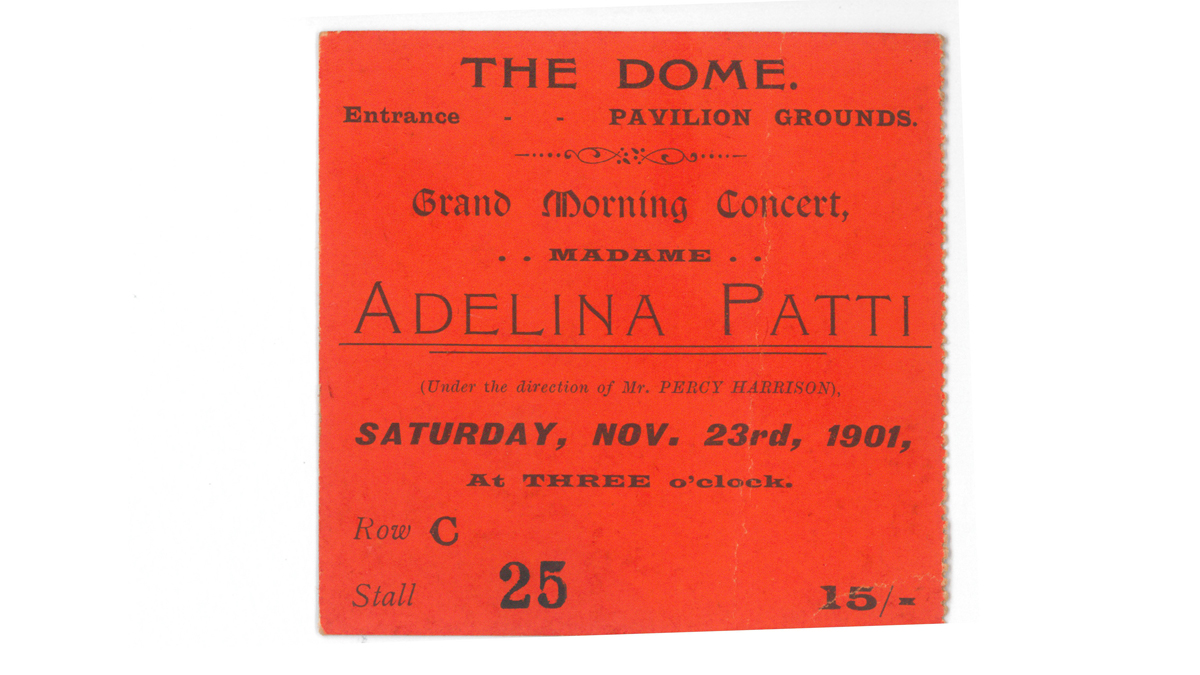 This ticket is most likely have been purchased from Lyon and Hall, a pianoforte manufacturer that was situated in East Street. The ticket is for a superior seat in the front stalls section of the concert hall and the price is a costly 15 shillings (approximately £80 today).

Cheaper tickets for the concert were also available at 5s. However, this ticket was for the audience to stand throughout the concert at the back of the hall.

A review of Patti’s Brighton Dome appearance in the Brighton Gazette stated:

’There is only one Patti. One was more than ever convinced of this fact on Saturday afternoon when the diva appeared at the Dome. She had a magnificent reception and her last appearance was the signal for an outburst of cheering which only the Queen of Song can evoke’.

The star finally retired from performing at the age of 63 and made her formal farewell appearance at the Royal Albert Hall in 1906. Although she made the occasional concert appearance after this, she spent most of her time at her impressive residence Craig-y-nos Castle in Wales until her death in 1919. Craig-y-nos Castle was eventually sold to the Welsh National Memorial Association which converted it into the Adelina Patti Hospital. The hospital remained in operation until 1986 and is now a boutique hotel and national park. Patti's private opera house, designed to be a miniature version of Milan’s La Scala, still exists within the castle today.