The works so far: photographer Carlotta Luke shares her favourite photos from the project

Architectural documentary photographer Carlotta Luke shares with us her favourite photos from her work documenting the grand transformation of our Corn Exchange and Studio Theatre as well as the new Gallery and Creative Space. 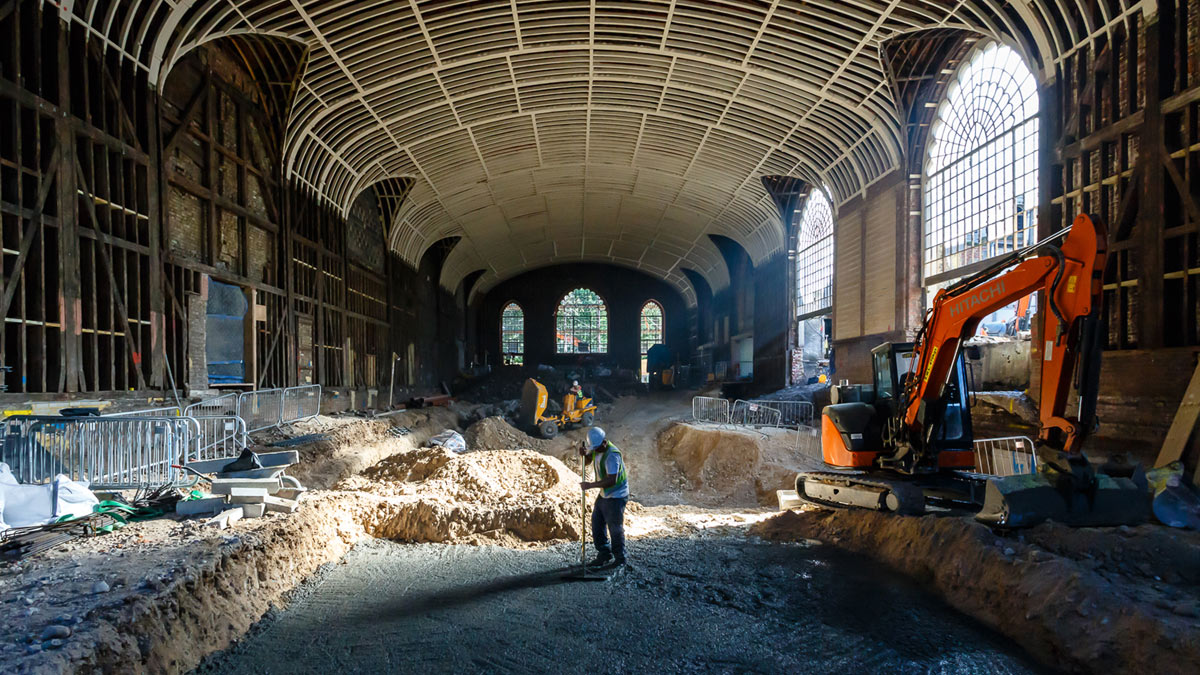 My first site visit to the Corn Exchange was also the first time I had been inside the building so I had no idea what to expect. I was amazed by the sheer size of the space. I don’t think I had ever been in such a vast room before. As I adjusted to my surroundings, I took in the two defining architectural elements: the graceful arching roof held up by hundreds of wooden struts and the huge ornate windows. Over the following two years I have photographed these elements again and again as they have gone through many stages of renovation.

Back to that first visit. It was the end of a hot June day. I had been there for several hours and the site was nearly empty of builders. I turned and suddenly everything came together in front of my lens. The workman smoothed the newly poured concrete, dwarfed by his surroundings, as dust got caught in the shafts of sunlight streaming through the window behind him. 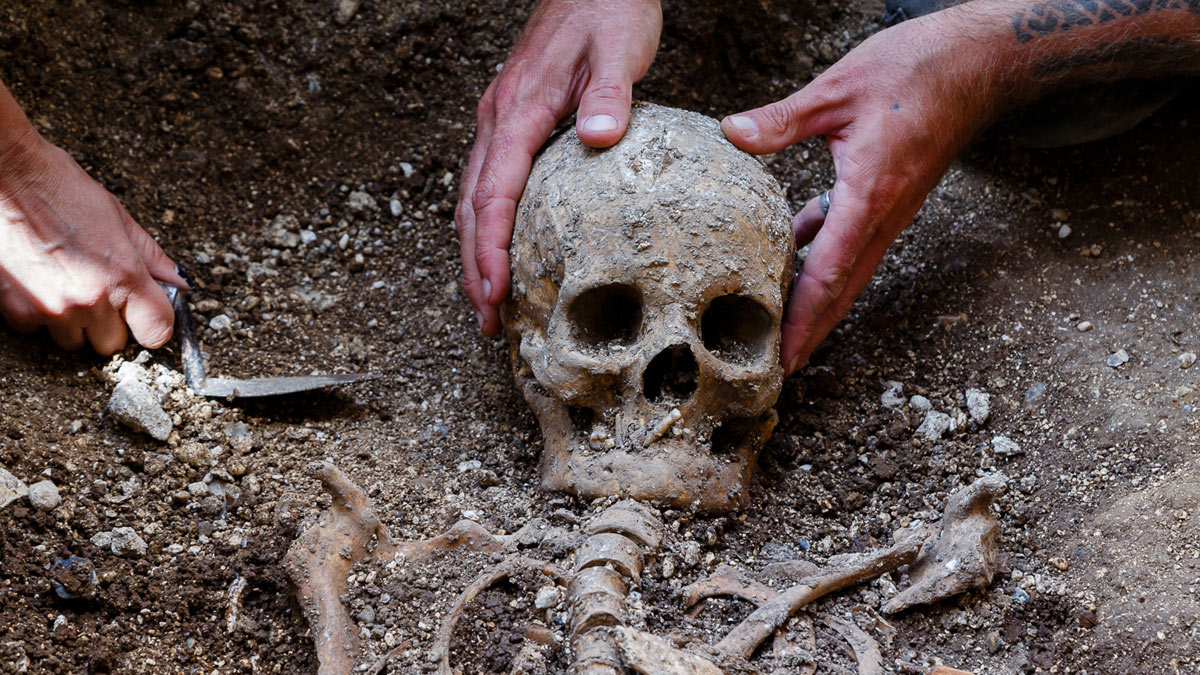 A month later I was called at short notice to come to the site because a 200-year-old Quaker burial plot had been uncovered. I was told that there is a strict protocol around photographing human remains. As the site’s official photographer, I was charged with documenting what was happening but keeping the photos safe until they could be released to the public.

I made two visits while a team from Archaeology South-East exhumed the 18 skeletons buried there. That process sounds very clinical, but the reality was utmost care, respect and diligence shown by the archaeologists. It was a painstaking process to find and catalogue every bone from each grave and took weeks to complete. I was curious to know how it felt to hold a human skull and was told that the first time was definitely a strange experience.

A couple of months later I was back again, scrabbling around the scaffolding on the southern end of the Corn Exchange with my cameras and tripod. As I climbed up to each level, I attempted to photograph through the very dusty old windows. I could see the spectacular view in front of me but I couldn't get the shot. Finally, at the top of the huge central arched window I found a single broken pane of glass in the very middle of the building. This was the perfect location for me to get a clear shot of the entire room just below ceiling height.

It can be hard to understand quite how large this space is, so here are the statistics: the room dimensions are 178 by 58 feet with a 34-foot high unsupported roof. To get a sense of this, if you search this photo carefully you might just be able to spot the two tiny workmen in the distance. 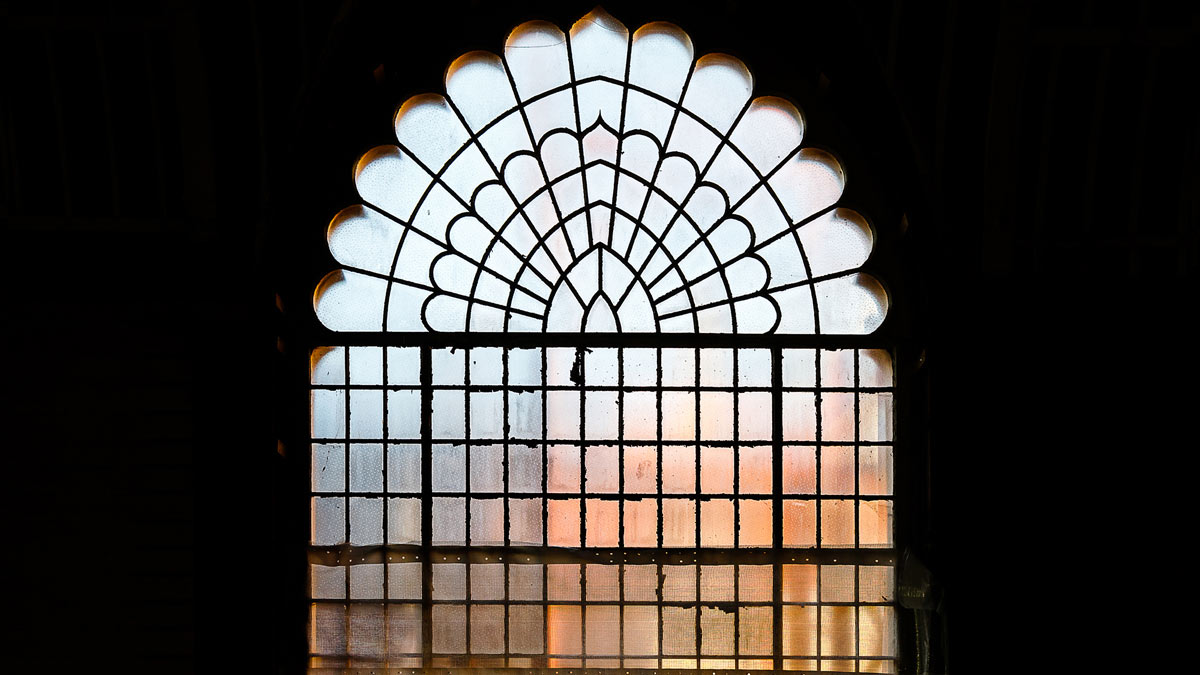 The Corn Exchange has the most beautiful windows that I come back to again and again, trying to capture their grace and elegance in photographs. I love that they never look the same depending on the time of day, the quality of light, the stage of renovation, with panes of glass and without, and sometimes covered by large sheets of plastic. The original glass in this west facing window was textured, which helped give definition to its shape when light shone through it. On this winter visit sunlight was hitting the buildings across the courtyard, reflecting a warm glow onto the delicate grid of glass panes.

Sixteen months later, and after a huge amount of work, the refurbishment of the windows is just about complete. The size and shape varies for every pane of glass on all the windows. This meant that each one had to be individually cut and fitted into its specific place. I counted 185 panes in just one of the 11 large windows of the main space. In all, this was a monumental task. 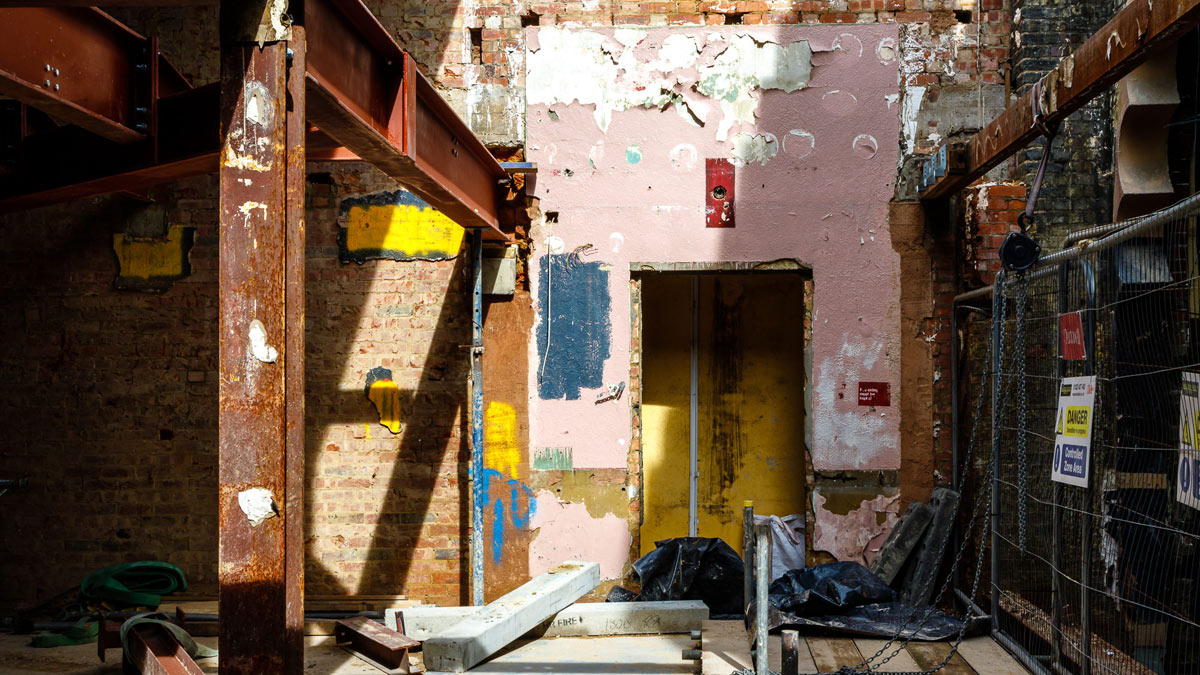 The Studio Theatre is undergoing a huge transformation, creating an intimate performance space with restored heritage features, better access and new balcony seating. These are the new steel girders that will support the balcony. When I photograph building sites I am always on the lookout for interesting colours and patterns. People often think of construction areas as grey and dull but they are actually filled with bright unexpected colour. It made my day to spot sunlight pouring down onto this Mondrian-like pattern of yellow, pink, red, blue, brown and grey. 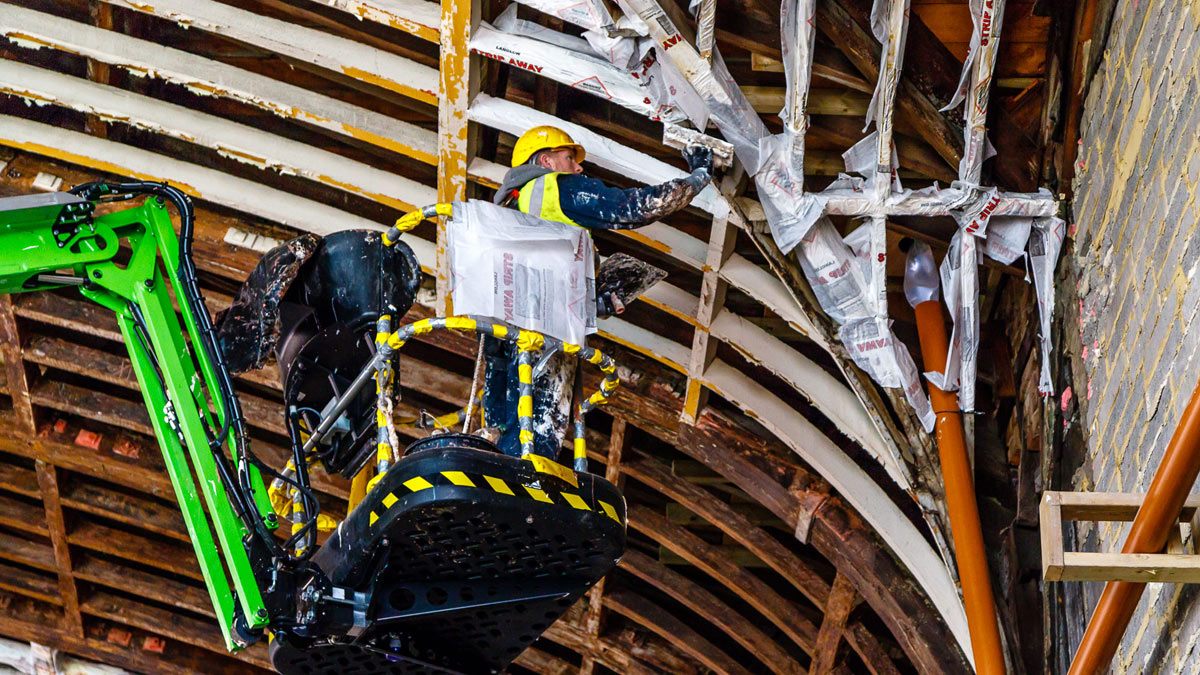 One of the defining architectural characteristics of the Corn Exchange is the huge unsupported vaulted ceiling held up by hundreds of wooden struts. It is the widest span timber frame building in the country. The original construction of this former Riding House was delayed because of the difficulty of finding long enough pieces of roof timber!

Repairing the ceiling has been as enormous a task as the refurbishment of the windows. We all inhabit the buildings around us, but it is easy not to think about the skill, craft and hard graft required to create them. Over the months I have watched with respect as workers manually stripped the white paint off of every one of the struts in the ceiling of the Corn Exchange and slowly renewed and repaired the wood. 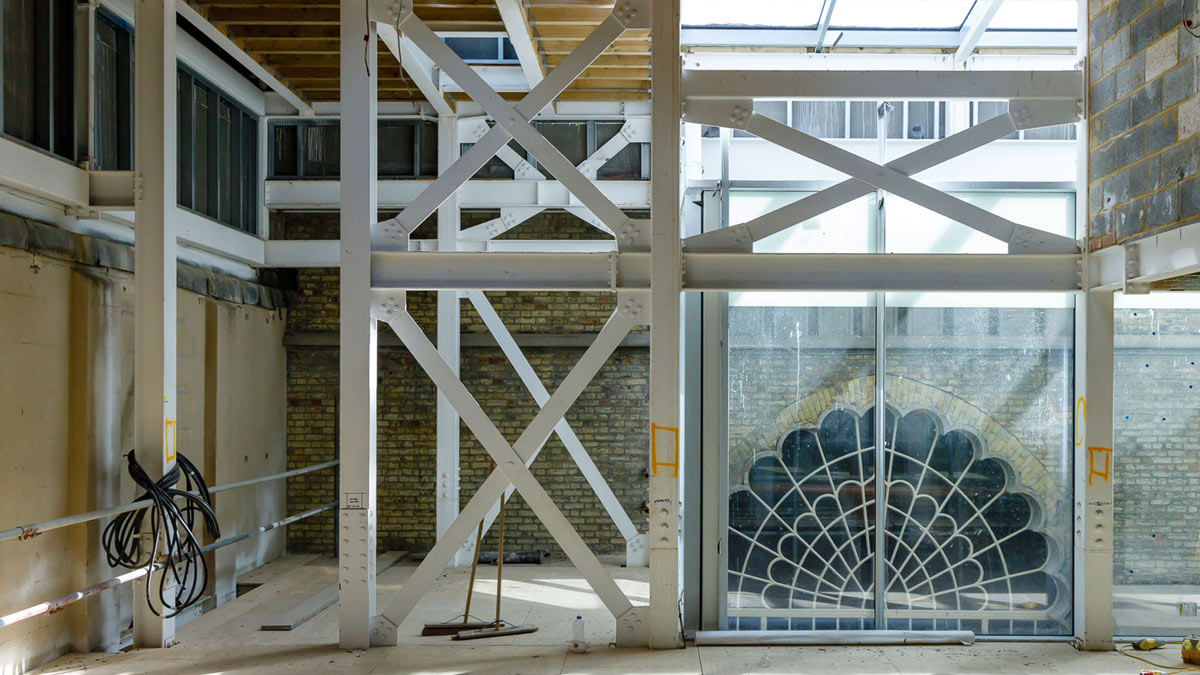 Fast forward a year. In every building project that I have photographed, there is a turning point when for the first time I get a sense of how a newly created space will work. My most recent site visit to the Corn Exchange was that point, when I finally understood how the new Gallery and Creative Space will feel. I had been watching a tangle of red steel girders grow in the courtyard space where the Quaker burial site had been, with little sense of how they would all work. The steel was then painted white, a glass ceiling installed and floors slowly emerged. Now I could finally see the white steel and glass box that encloses the courtyard and the dazzling new light-filled spaces it creates, where the exterior becomes the interior and the graceful old windows are in pride of place. It is going to be beautiful when it is finished.