This is an envelope dating from July 1915 addressed to the Kangra District in the state of Punjab, situated in Northern India. The ‘Pavilion & Dome’ stamp on the back confirms that the letter was sent from the Indian Military Hospital based at the Royal Pavilion Estate between 1914-1916. 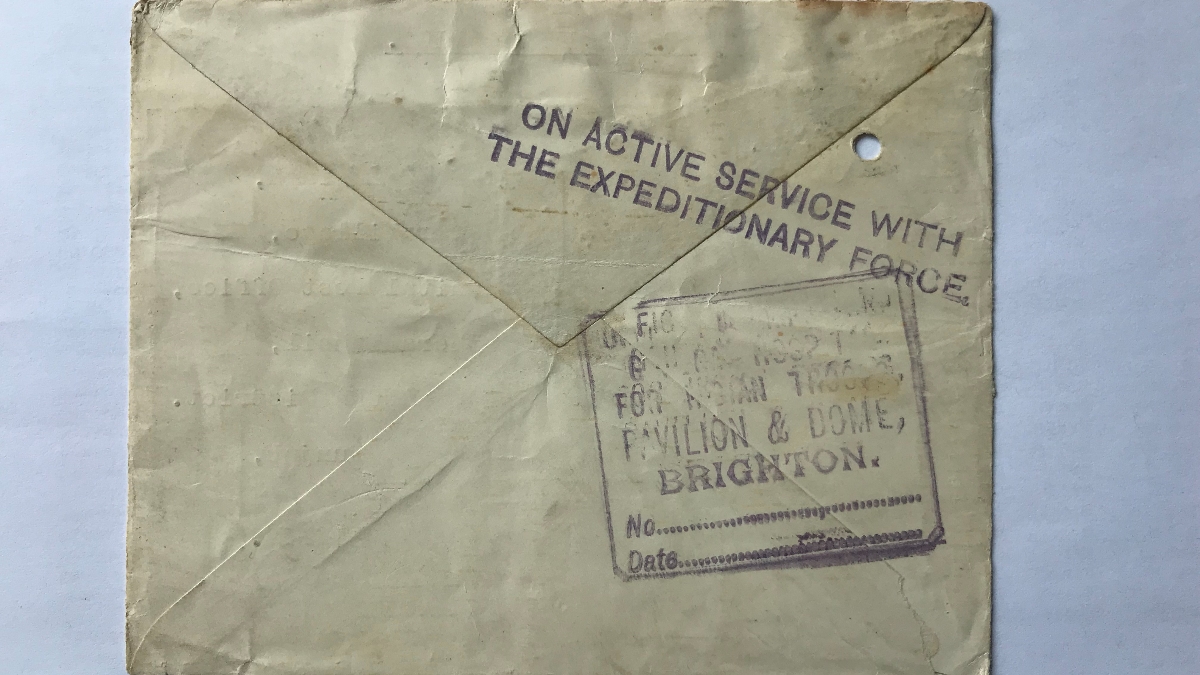 The Indian Army played a vital role in the first few months of the First World War. At a time when Britain was still recruiting and training volunteers, soldiers from across the Empire came to fight in Europe and support the British cause. The Indian Army provided the largest number of troops and by the end of 1914 they made up almost a third of the British Expeditionary Force.

Engaged in fierce fighting on the Western Front, the Indian Army inevitably suffered casualties. Medical facilities were urgently required and it was felt that there were neither the facilities nor expertise in France. Brighton was chosen as the site for a complex of military hospitals dedicated to the care of wounded and sick Indian soldiers. Three buildings were given by the town authorities for this purpose: the workhouse (renamed the Kitchener Hospital), the York Place School and the Royal Pavilion (including the Dome and Corn Exchange). The Royal Pavilion was the first Indian hospital to open in Brighton and was converted into a state-of-the-art medical facility in less than two weeks. New kitchens, plumbing and toilet facilities were established and 600 beds were set up in new wards. The first patients arrived in early December 1914.

Sadly, this envelope does not contain a letter. However, as there is a red censor’s stamp on the letter, experts at Brighton Museum have advised us that the letter may be contained within the British Library archives. This research task has been passed to our Heritage Volunteers and we will be sure to update you if the letter is found.

Why were the letters censored? David Omissi, author of Indian Voices of the Great War, writes 'Paradoxically, we know so much about Indian soldiers’ letters because they were censored. As in the British Army, British regimental officers read soldiers letters to ensure that they did not reveal information of possible military value to the enemy, A secondary layer of censorship was set up in November 1914 to monitor ‘inward’ mails the Indians because of concern that seditious literature might be sent to the troops. This censorship was then extended to outward mail because of concerns of evidence of depression in the hospitals. The main aim of this censorship was to gather intelligence, particularly about the morale of the troops, rather than to prevent them from writing'. There was a team of censors 'which consisted mainly of Indian Civil Servants and former Indian army officers with a command of the relevant Indian languages. The censors produced short weekly reports on the contents of Indian mails. These reports included extracts from forty to ninety examples of the Indian letters translated into English. The entire censorship archive runs to around 4,000 pages (the vast majority of the original letters have not survived)'.