Remembering the Nurses and Sisters of the Royal Pavilion Military Hospital

Our Heritage Volunteers have been researching into the past to uncover stories of Brighton Dome’s role during the First and Second World Wars.

From 1914 to 1920, the Royal Pavilion Estate, including Brighton Dome and Corn Exchange was transformed into a make-shift military hospital. From 1914 to 1916, wounded Indian soldiers were treated here and from 1916 to 1920, soldiers who had severe physical injuries from serving in the First World War were helped back to health. Wartime nursing staff are often overlooked in military history but many of the nurses and sisters who worked at the Royal Pavilion Military Hospital received decorated honours, this is their story.

The nurses and sisters stationed at the Royal Pavilion Military Hospital were from the Queen Alexandra’s Imperial Military Nursing Service (Reserve) (Q.A.I.M.N.S.R), the nursing division of the British Army and the Voluntary Aid Detachment Scheme (V.A.D), a group of civilians who volunteered to be nurses and ambulance drivers.

Between June 1916 and February 1920, when the hospital became a facility for disabled soldiers, a magazine titled The Pavilion Blues published poems, drawings and stories written by soldiers, and featured profiles of the sisters and nurses who worked at the hospital.

Among the published articles was the story of Staff Nurse I. Thompson, who in September 1914 travelled to Antwerp with Mrs. St Clair Stobart’s Unit under the St John’s Ambulance and “retreated with the wounded during the bombardment, the day before the Germans entered the city”. She was selected to set up a hospital in Serbia and joined the Q.A.I.M.N.S.R. in October 1915, transferring to the Royal Pavilion Military Hospital in June 1916. Staff Nurse Thompson was decorated at Buckingham Palace with the Royal Red Cross (2nd class), awarded the King of Serbia’s ‘Cross of Charity’ and the Serbian Red Cross. 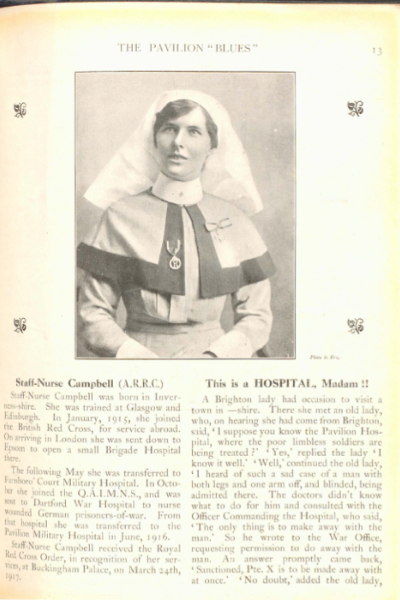 Another nurse noted for her service was V.A.D Nurse Miss L. Grimshaw awarded the Royal Red Cross (2nd class), having transferred to the Royal Pavilion Military Hospital in May 1916.

As well as caring for the patients, the sisters and nurses were involved with the hospital’s entertainment programme. The Pavilion Blues records that V.A.D Nurse Martin sang a “beautiful” song called Motherland Mine at a “Blue & White” – a concert put together by the soldiers themselves. In the magazine’s August 1919 edition, there is an article dedicated to “Our Gymkhana”, a 16-event sports day, which included a sisters and nurses’ competition. Mrs Rouse from the Massage Department was placed first and Staff-Nurse Bridge of ‘C’ Section was second.

Join us on Sat 6 Nov for a day of free activities exploring wartime memories of Brighton Dome. Find out more here.