A night with production in Brighton Dome Concert Hall

Our Director of Development, Barbara Macpherson, took some time with our production team finding out just what it’s like to do a changeover in our Concert Hal l- from a seating to standing show. This is a big job, which involves working through the night and a huge amount of effort and skill. Read on to find out just how Barbara found the night…

If you were at Nick Cave on Thursday – take note.

Enjoy the lovely flat floor in front of the stage because all of that happened ‘as if by magic’ in the wee hours of Wednesday night. It wasn’t really magic, actually - just hard work.

It is one thing to tell someone about the needs of the venue, very different to tell them about it once you have seen it yourself. So, I was interested to see an over night turn around with production – and they kindly obliged and let me tag along for the night.

I arrived ready for duty with a box of Krispy Kremes and a pair of gardening gloves. I didn’t have steel toed boots. Not sure I am a natural at this.

It was quite a thing to witness. My overwhelming impression was how incredibly labour intensive every aspect of the work is; there don’t seem to be many short cuts. All of this state-of-the-art, high tech equipment but everything still had to be dismantled and loaded piece by piece and manually. In addition, everything has to be choreographed perfectly when putting it away. One bit of kit sticking out a few inches further than it is supposed to will throw everything off. There were also times when six guys had to move several tons of chairs with no help from technology. Or me (I didn’t have steel toed boots so I shouted encouragement from the side instead). 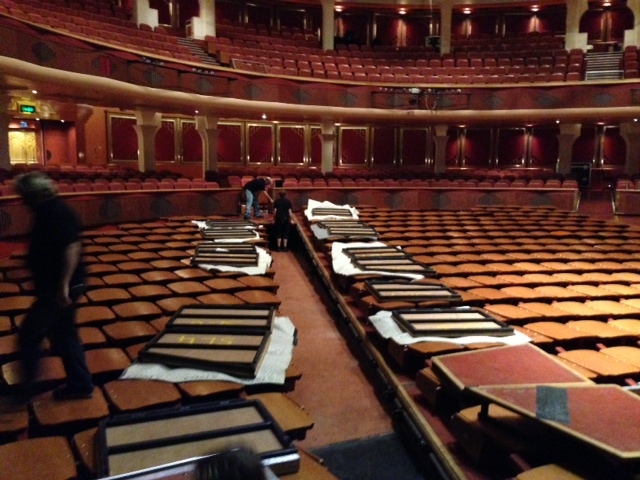 I managed to get tangled in all the cables and very carefully peeled off the tape that Nick had just very carefully taped up. Not sure Production will be inviting me to apply for a job any time soon. The good thing about seeing double at 2:30am is that you actually think you have wound up more cables than you have actually wound up. When I was able to re-focus and had regained consciousness I realised just how long it was taking me compared to everyone else who made it look easy.

We all work in such different areas with very different types of pressure and concerns. It was really helpful to see how an entirely different part of the organisation operates. 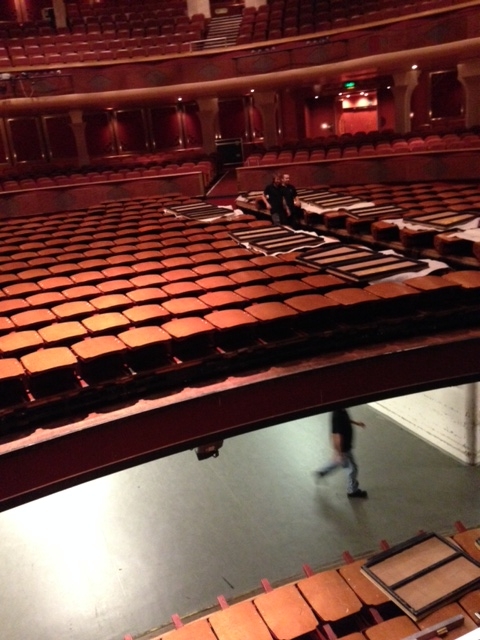