Cheerleading, Americana and what it means to be a winner - Action Hero bring it on in Hoke’s Bluff

Paying homage to the trite story-lines, inspiring locker room speeches and cheap sentimentality of American teen sports movies, Action Hero’s new show Hoke’s Bluff challenges the audience to explore what it means to be a winner (on the inside). We caught up with one half of the theatre company Gemma Paintin to find out more.

Hi Gemma. Can you tell us a bit about yourself and your role in Action Hero?

We understand that Hoke’s Bluff is inspired by ‘the cliches and conventions’ of American teen sports movies. Can you tell us a bit more about it and why you were drawn to the subject?

We've had an ongoing interest/obsession with Americana for quite a while now. In this instance we became fascinated by the storytelling of those films, and what those narratives tell us about ourselves. Why do we like hearing the same stories over and over? Why am I so compelled by a story that's so different to my own experience of the world but yet seems so familiar? What is it about cheap sentimentality that triggers such emotional responses, and are those emotions real? Although the subject matter is sometimes trashy, the reasons its popular isn't trashy at all, I think it’s really about what makes us human. 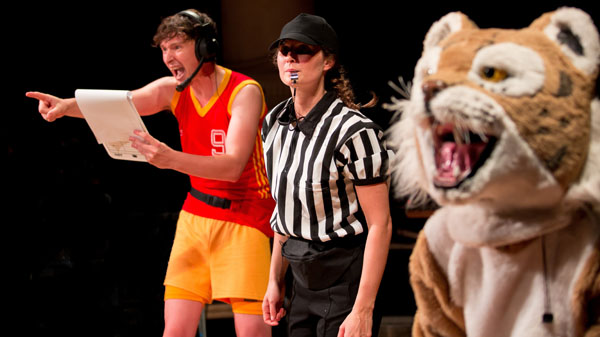 Where does the title come from and what does it mean?

The title comes from a census of small towns in Alabama. We had a big long list of 100s of place names and there was a place called Hokes Bluff. It sounded so improbable, like a joke name. Like a place that was bluffing to itself, performing to itself a version of small town America as it is communicated to us through mass media, like maybe it was pretending to play along with some kind of Utopian vision of the ideal, perfect place, and maybe the playing along is inseparable from the real thing. We added an apostrophe into ours so we could distinguish it from the real place, ours is Hoke's Bluff. They're pretty close to each other though. I've had to stop myself finding out too much about the real place because it’s just too much of a mind twist for me!

As in your previous work, Hoke’s Bluff has an immersive/interactive element. Can you tell us more about what can the audience can expect to see/do?

The audience have a role to play as the team and as the spectators at the game (real and fictional: there is the 'game' of the show being played and the fictional game of American football/Ice Hockey/Baseball/Basketball that is happening throughout) so they kind of help us to make the show happen. It’s very friendly though, and they mainly cheer us on and root for the Wildcats!

What interests you about this approach? What are the challenges?

I think we feel like theatre and performance is such a live thing that it can only really exist when we're all in the room together, so we want to make it count. 100 or 200 people sharing a room, being part of the same thing is a really incredible space to be in, sharing that time together. We want to celebrate that. The challenge is how we create a piece that leave space for each audience to play their part in their own way, that takes whatever they give us and makes it work.

We see you are wearing a cheerleader costume in the publicity pictures. Can we expect some high kicks and cheers?

If only there were high kicks! We do our own special version of cheerleading. The costume and the image is so iconic, it brings so much to the show just having those visual references- again it seems so familiar yet its culturally so far away from many people's personal experiences. 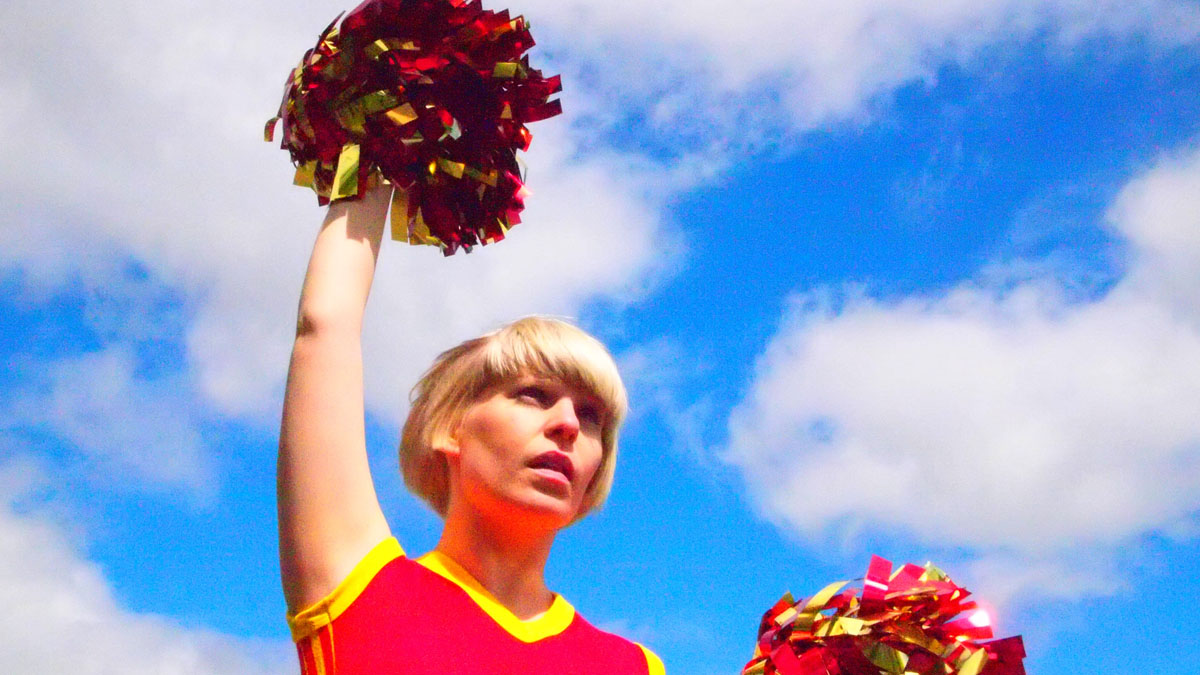 We gather you can even buy merchandise and ask questions to the coach. How much back story have you created for the characters/concept? What does it add to the piece?

There's an entire world, we just got so carried away as we were making the show! There are so many amazing bits that didn't make the cut, entire storylines had to go, some really beautiful text, an entire section about a trombone player in the marching band..... we want to do a 'deleted scenes' thing one day! Hoke's Bluff has been such a pleasure to write and create for.

There seems to be genuine affection and nostalgia about the subject in the piece. What were your own favourite American teen movies when you were growing up?

All the classics- Remember the Titans, Any Given Sunday, Bring it On - I love all that stuff. What's amazing is that they all have the same story, but they get me every time. I'm interested in taking that sentimentality seriously, not laughing at it and saying its stupid, but revelling in it and enjoying what it is doing in terms of storytelling and in terms of what it reflects back to us about the stories we enjoy hearing.

And sport…Were you into a sport at school or were PE lessons the low point of your week?

I was awful. Really, really bad. I invented the role of 'class photographer' to get out of Sports Day. James is pretty good at Basketball though.

The subject of America has cropped up in several of your works. As a British theatre company, why have you returned to it?

Because it’s just always there. Global pop culture is American culture, and even then it’s a version that is filtered and constructed by Hollywood, so there's this weird sense that as a British person I am intimately familiar with stories and lives and characters whose lives bear no resemblance to my own. I am immersed in a culture that is not mine, but it has become mine. And within the US, as a visitor, I can't tell whether those small towns are replicating the Hollywood version and telling the story of America and the American Dream back to themselves, playing out for real, or whether it started there and Hollywood has picked it up and is exporting that narrative to a global audience, so those narratives of hope and being a winner become everyone's narrative. It’s just so fascinating to me. I find it so seductive, and also deeply moving too. I'm totally in love with that version of the world, and yet I simultaneously find it very sinister and cynical.

Are there any other theatre companies currently that you particularly admire?

Yes, I'm a big fan of Nature Theatre of Oklahoma and I have huge admiration for them. They are my current Art Crush. I love Lone Twin's work and I love Search Party.

What’s next for Hoke’s Bluff, the Wildcats and Action Hero?

Next for Hoke's Bluff and the Wildcats are lots more shows before Xmas, and then some more in the Spring, and next for Action Hero is making a small piece for one person at a time for IBT15 in Bristol in February, and then working on a new show called Wrecking Ball which we hope to finish by next summer.