In September 2020, we commemorate the 85th anniversary of the Art Deco refurbishment of Brighton Dome. Architect Robert Atkinson (1883-1952) transformed the Concert Hall into the venue we recognise today. He also re-purposed the Corn Exchange and designed the building that would eventually become the Studio Theatre.

Art Deco architecture is dramatic, stylised and greatly influenced by the silver screen, the ‘jazz age’ and the aspiration for luxury. Characterised by geometric shapes, symmetrical arrangements and smooth sweeping curves, Art Deco buildings were also accessible and functional, made of concrete and steel.

The design era aimed to bridge the gap between the rich and the poor; according to architectural historian Elain Larwood, the ‘coquettish twists of metals, marquetry and mosaics are symbolic of an age of glamour that the movies conveyed, even if real life was not like that'.

In early 1919, Robert Atkinson secured a place to study cinema design in the U.S. He was in search of a new, modern architectural style and, while in New York, witnessed the rise of the super cinema. He went on to build Brighton’s Regent Cinema - the first super cinema in the UK - situated on the corner of North Street and Queen’s Road, it was demolished and is now a Boots store. The seating capacity of the cinema was just shy of 3,000 and the balcony was the largest in the country at a span of 110 feet. In 1931, Atkinson designed the interior of the Daily Express Building in London, which has been described as the ‘best surviving art deco interior in Britain’.

During the interwar period, Brighton Corporation undertook a programme of works to improve the town. Major slum clearance operations took place during the 1930s while there was considerable residential growth in areas such as Patcham and West Blatchington. The 1930s also saw a transformation in Brighton’s leisure and entertainment venues as it flourished as a popular resort. Many Art Deco style cinemas, dance halls and theatres opened during this period, as well as new attractions such as Saltdean Lido (1938).

Brighton Corporation also felt that Brighton Dome needed an overhaul. Originally opened as a Concert Hall in 1867, the building urgently needed refurbishment. An abundance of ornate pillars in the auditorium created difficult sight lines, the lighting was insufficient and the room had limited heating, cloakroom and lavatory facilities. According to the Daily Herald, orchestral conductors had ‘complained at musical festivals of the bad acoustics, and one of the main aims of the scheme is to get rid of the echo’. In 1933, the corporation appointed Robert Atkinson as lead architect of the refurbishment, perhaps because of his success with the Regent Cinema. Work began on the project in early 1934 and began with the Corn Exchange and New Road buildings. 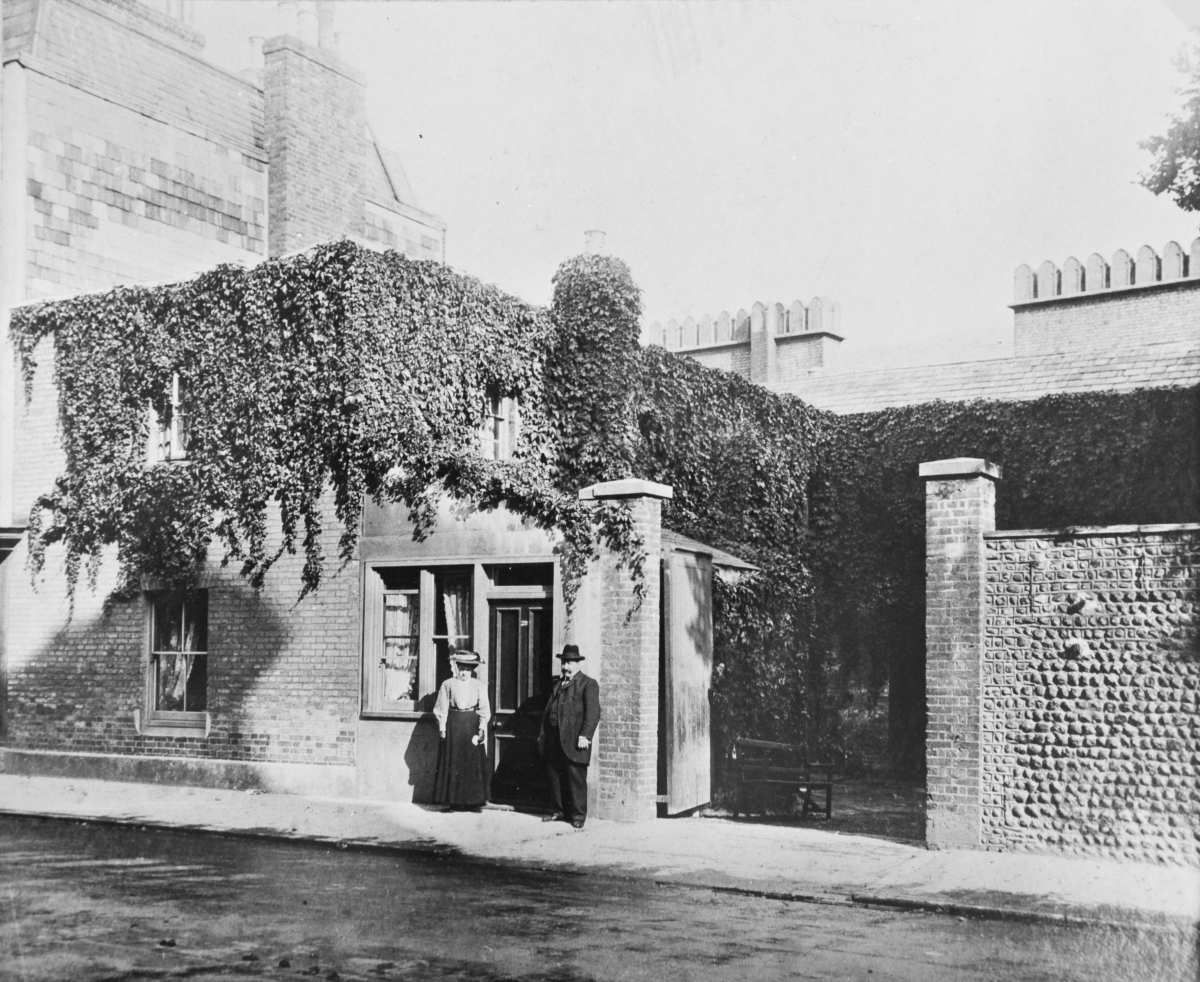 Dome Cottage, a picturesque cottage built in New Road on the original site of Maria Fitzherbert’s stables, had been demolished in 1932. In 1934, work began on this site to establish new kitchens for the Corn Exchange and basement accommodation for catering staff. Above the kitchens was a ‘supper room’ used for conferences, public meetings and dinners. The supper room also contained a small stage and had a separate entrance from New Road. This building eventually became the Pavilion Theatre, renamed as Brighton Dome Studio Theatre in 2012. 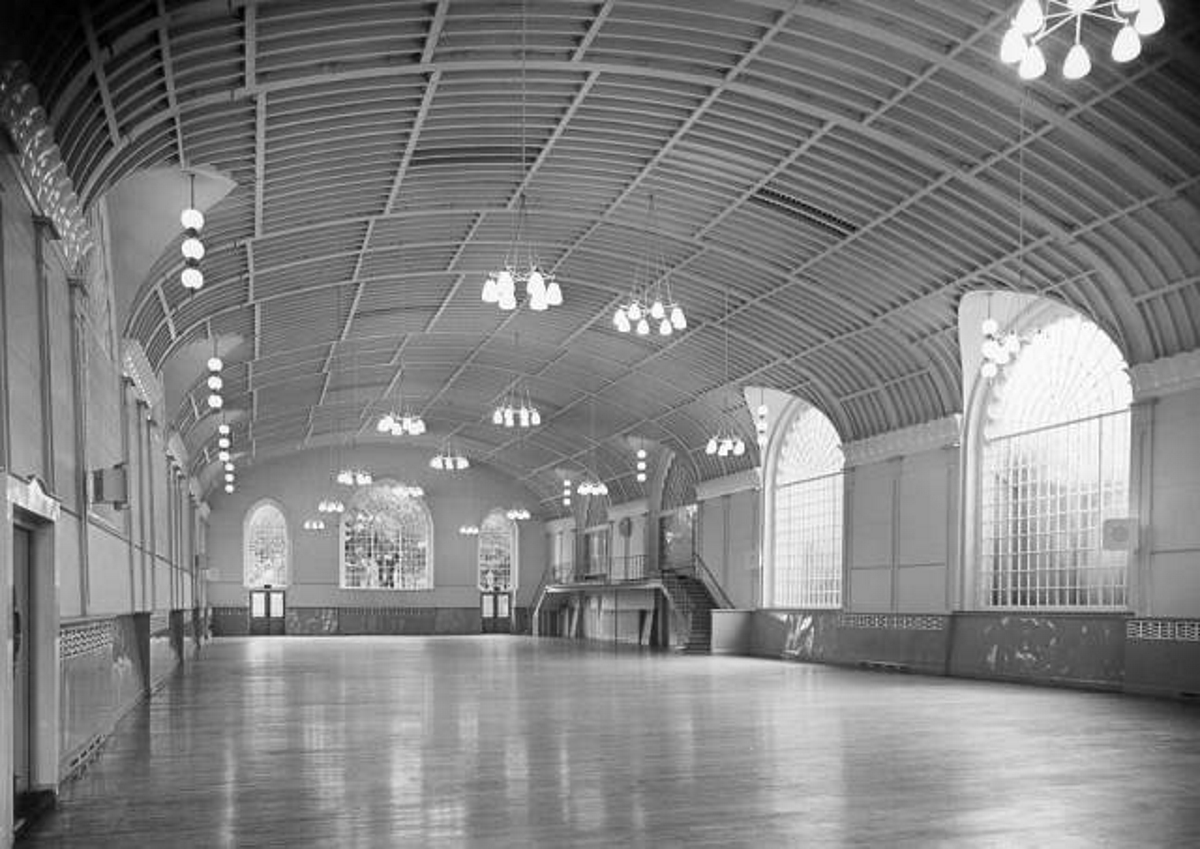 Derelict buildings at the north-western corner of the estate in Church Street were removed and a new entrance to the Corn Exchange was created. Temporary ‘rooms’ which had been built and partitioned off were also removed and the original proportions of the room were re-established. Mirrors were placed on the eastern wall to correspond with the windows on the opposite side and a two-way staircase, connected by a balcony at the southwest corner, provided access to the new supper room and kitchens in New Road. A maple wood floor was laid throughout the main space, which most crucially was suitable for dancing! 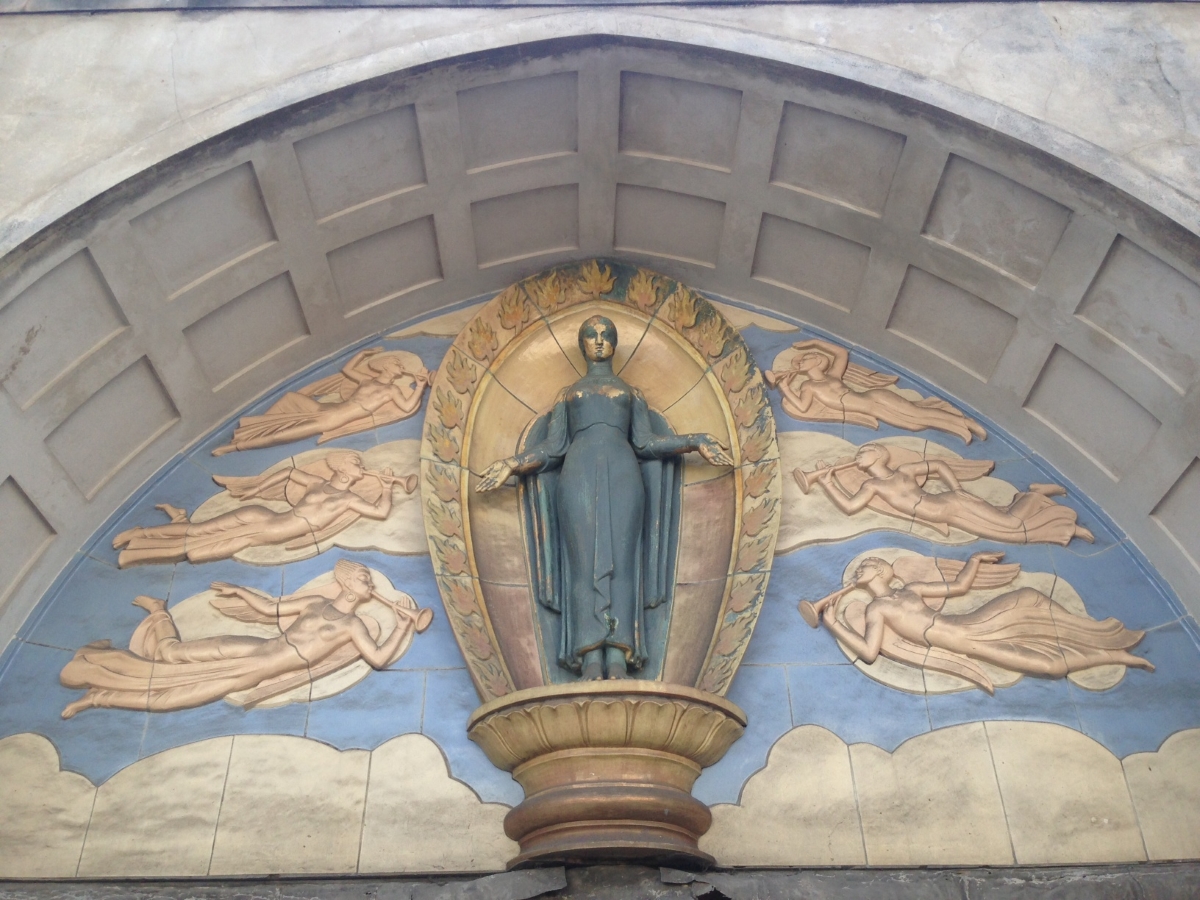 One of the most recognisable features of the 1934/35 redevelopment is the statue of Ceres, the Roman Goddess of agriculture, which stands above the entrance to the Corn Exchange in Church Street. Ceres was sculpted in 1935 by renowned artist James Woodford OBE RA (1893- 1976). The statue’s pose and distinct ornamental style reflects the exotic architecture found on the Royal Pavilion Estate. 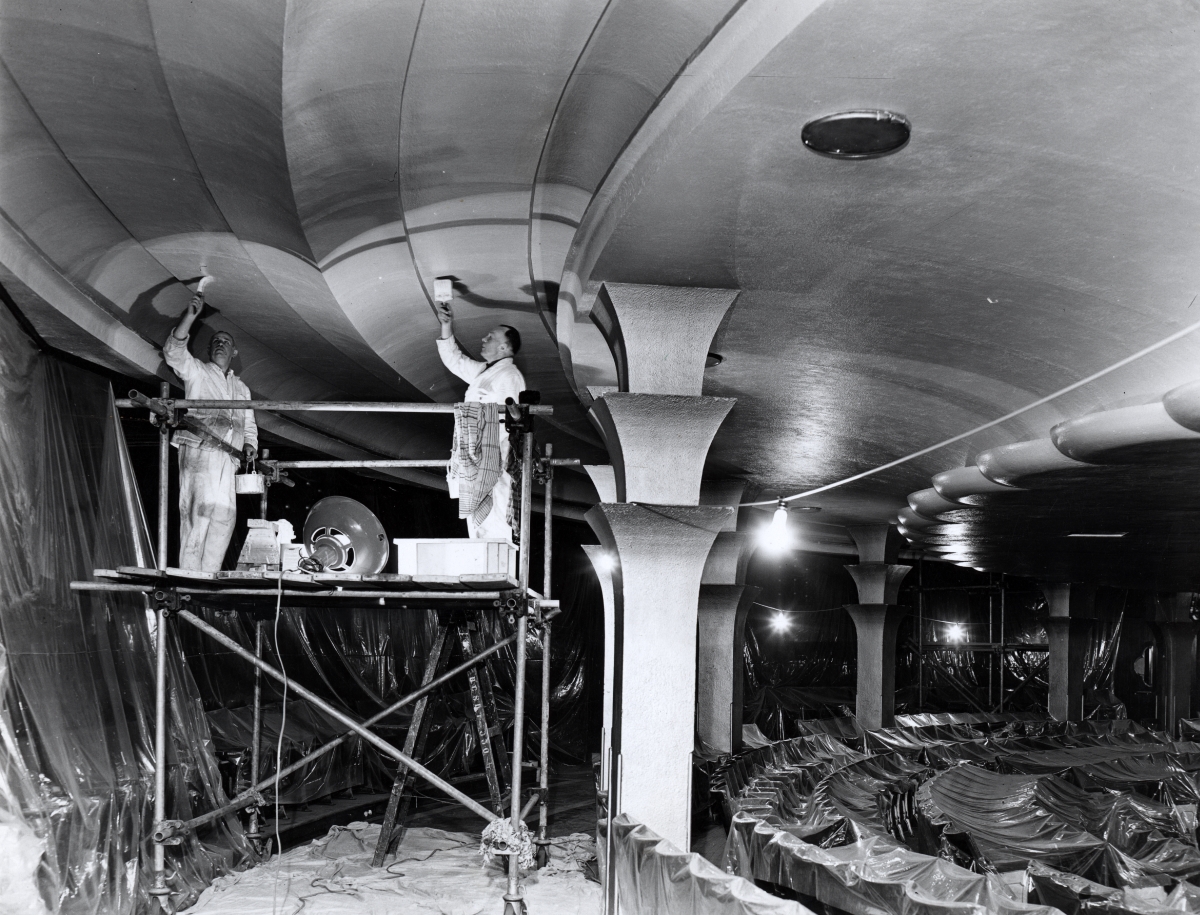 The refurbishment of the Concert Hall started on the 1st December 1934. While the exterior architecture of Brighton Dome would remain untouched, the interior of the Concert Hall received a radical Art Deco redesign. The building was stripped back to its original steel structure, removing almost every trace of the original 1806 stables and 1867 venue. Builders removed all the cast iron columns and a new inner roof established, 21 feet below the old one. This meant that the famous gas chandelier - a magnificent central feature previously converted into an early hybrid of gas and electricity by none other than Magnus Volk – was removed and dismantled.

According to Atkinson, the greatest problem of the reconstruction ‘was the retention of the existing Dome which had to be supported during the progress of the work’. The old dome was temporarily supported on steel towers so that no movement would be possible during the building work, and was further tethered by a chain placed around the timbers. Atkinson concluded ‘The work has been carried out without the slightest movement and the present dome is within a fraction of its old position’.

The seating capacity of the auditorium increased to 2,500 with additional standing room for 500. Raked, or sloping seating was introduced into the concert hall for the first time but a temporary floor was also provided for when the building was used for dances or exhibitions. Atkinson also installed a new orchestra pit and organ, while the walls at the back of the interior, on both floors, and in front of the new balcony were panelled in walnut, set diagonally to augment the hall’s acoustics. A new box office - the first time that Brighton Dome had its own designated ticket office – and telephone room were installed in the Foyer.

Behind the scenes, dressing rooms large enough for choirs and orchestras were built below stage. A small cinema and projection room was added and in order to provide facilities for staging and scenery, the entrance from the back of the stage into Pavilion Gardens was made by opening up the original southern exit from the stables that had previously been bricked in. 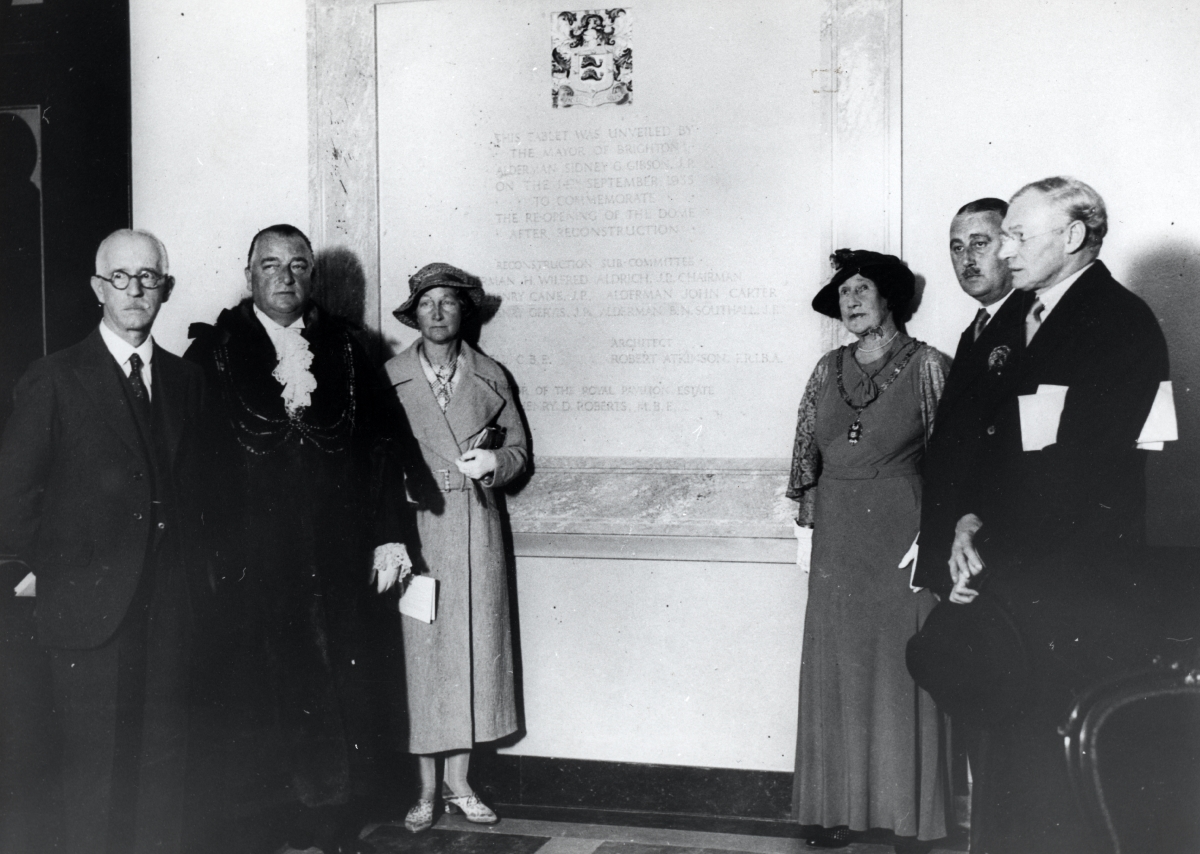 Brighton Dome was formally re-opened on 14 September 1935. The refurbishment of the Concert Hall and the installation of a new organ cost £58, 857, while the combined cost of the Corn Exchange and Supper Rooms was £34,000. The London Philharmonic Orchestra, conducted by Sir Thomas Beecham, performed in the opening concert. However, not everything went to plan; when asked his opinion of the building, Beecham retorted ‘What it is like from where you are sitting I don’t know. From my impression as a conductor it must be pretty bad ……I must inform you that the windows of the dressing room are hermetically sealed. There are windows which no one can open. I have put my stick through three or four. Before I go home I am going to put it through all of them’. Beecham concluded: ‘I congratulate you on this magnificent structure. I hope it will be of some use to you. It is of no earthly use to me’.

85 years later, we can safely say that we have proved him wrong.