Brighton Dome’s Discoveries from the Archives

Before the coronavirus pandemic, our Heritage Volunteers were involved in the process of cataloguing and preserving the Brighton Dome and Brighton Festival archives. The archives contain a wide range of ephemera, ranging from concert programmes, posters and tickets to press photographs, architectural plans of the venue and even unclaimed lost property from many years ago.

Some of the items discovered include the oldest ticket dating back to 1904 and the oldest concert programme from 1874. These items are of enormous interest as we have very few items dating from before the 1930s. They offer an intriguing historical snapshot into the types of events that would have been held at Brighton Dome at the turn of the 20th century.

Do you have any interesting archive items that you’ve kept from visiting Brighton Dome & Brighton Festival? We’d love you to share your pictures on social media tagging in Brighton Dome or contact us by email: heritage@brightondome.org 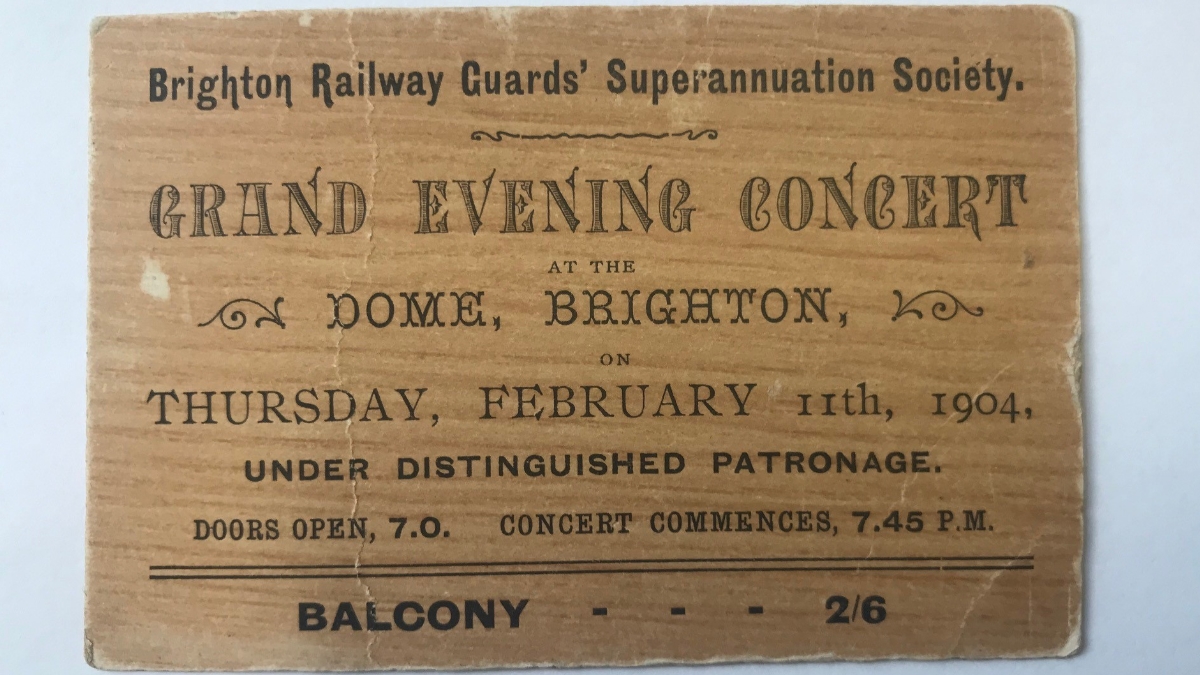 The oldest ticket found within the archive is 116 years old and is for a Grand Evening Concert held by the Brighton Railway Guards' Superannuation Society on Thursday 11 February 1904. Starting in 1891, the fundraiser became an annual event held for many years in the Concert Hall in order to raise money for their company pension and hardship fund. The concerts would have consisted of musicians and local variety acts. A review of this concert appeared in the Brighton Gazette stating that there were 'musical sketches', 'selections from The Nutcracker' and a string band from the Portsmouth Division of the Royal Marines.

The Fairy Ring Programme from 1874 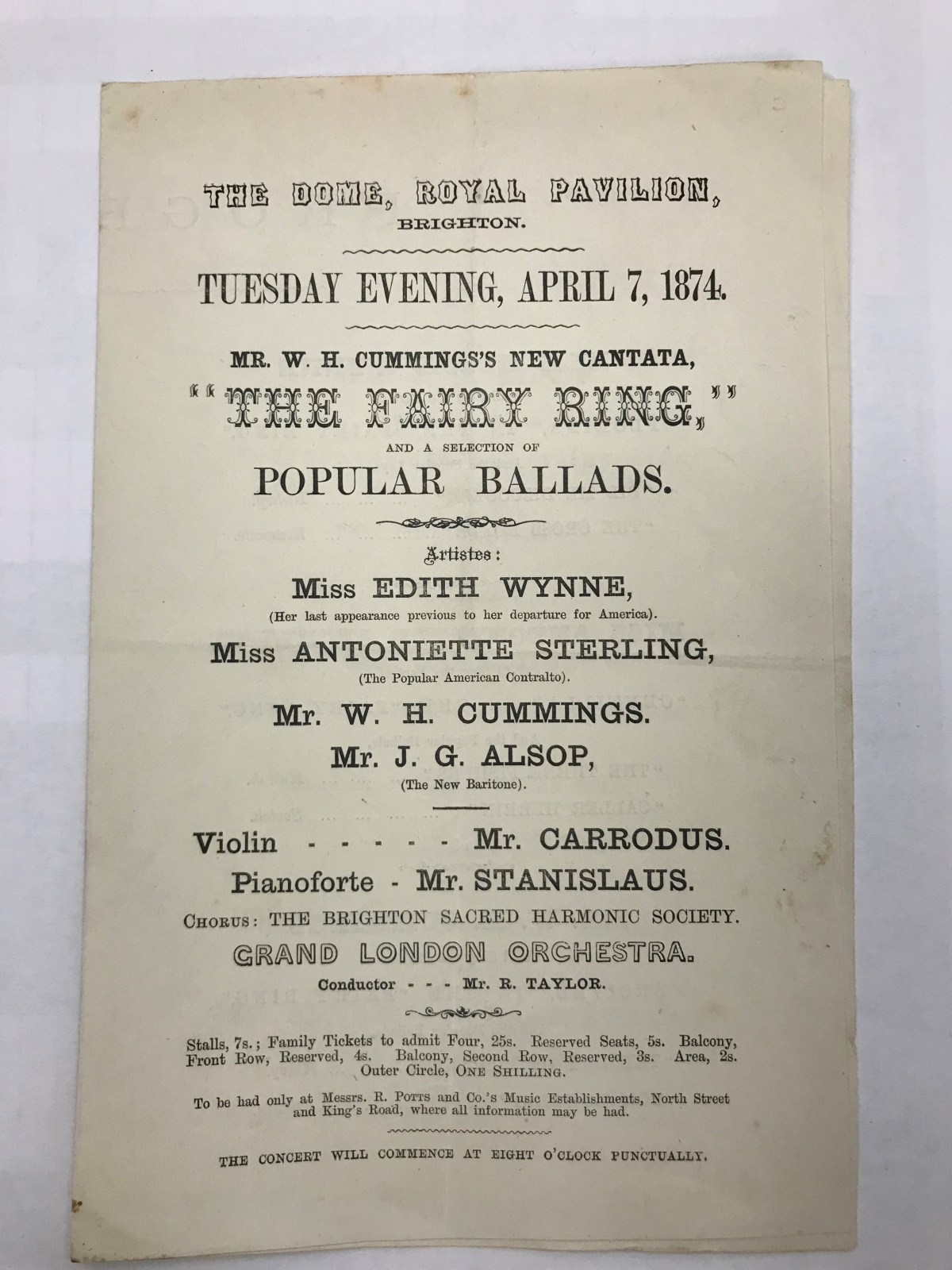 The oldest programme is for a performance of The Fairy Ring, a new cantata by the composer W.H. Cummings, performed in the Concert Hall on 7 April 1874. 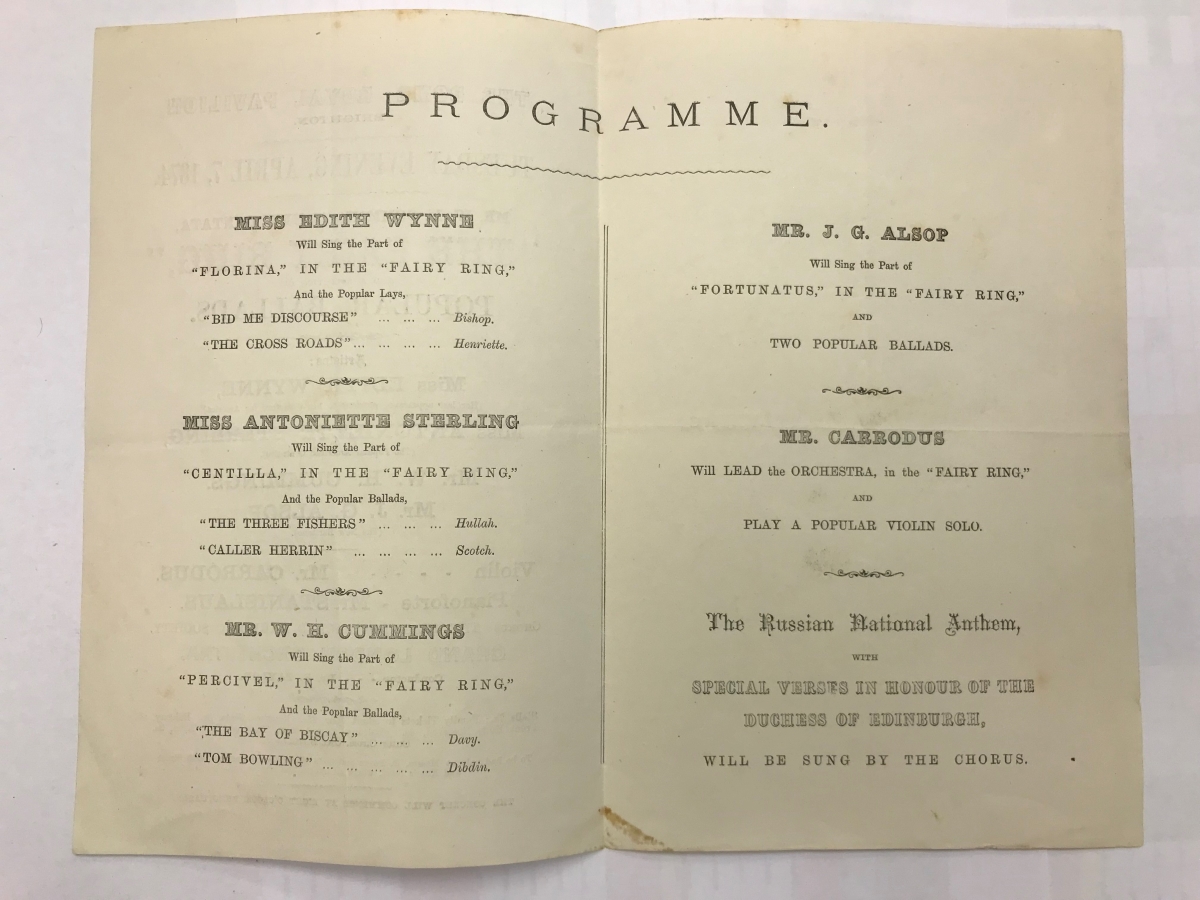 A cantata is a short, semi-staged composition that tells a continuous narrative. W.H. Cummings was a renowned musician and tenor who founded the Purcell Society and later became the principal of the Guildhall School of Music. His new composition was part of a varied concert bill, which also included a selection of popular ballads, a fashionable trend in classical concerts from the early 1870s. The concert also featured the Welsh operatic soprano Miss Edith Wynne and the American singer Miss Antoinette Sterling, both of whom would have been quite an attraction for audiences in the Victorian era.