100 years on from the first women in the country being granted the right to vote, Brighton Dome has been officially recognised as one of 41 buildings across England that were at the centre of suffragette action.

The sites, which include Westminster Abbey, Epsom Racecourse, and Manchester’s Free Trade Hall, have been updated on the National Heritage List for England – which previously carried no record of their links to the movement.

Brighton Dome, which was converted into a concert and assembly hall in 1867, was an important centre of activity for Brighton members of the Women’s Social and Political Union (WSPU) in the early twentieth century, with suffragette leaders Emmeline and Christabel Pankhurst, Emmeline Pethick Lawrence and Lady Emily Lutyens all speaking at large public meetings there.

The venue was also the scene of militant activity by suffragettes who interrupted several meetings by Liberal politicians. By 1908 the government had resorted to barring women from Ministerial meetings, but this didn’t deter the suffragettes.

In January 1910 police extricated two women from inside the organ at Brighton Dome, after they drew attention to their hiding place with a sneeze. The pair - Brighton-local Eva Bourne and high-profile activist Mary Leigh - had planned to leap from the organ during a talk that evening by anti-suffrage Prime Minister Herbert Asquith. The discovered women displayed a sparky sense of humour, as The Argus reports: “’We are thinking of bringing a counter-charge about the horribly dusty condition of the organ’, remarked one to an Inspector with a twinkle in her eye.”

Votes for Women, the WSPU’s newspaper, printed a picture of one local suffragette, Mrs Newsome, who managed to attend the meeting disguised in her husband’s clothes. Whilst listening to Prime Minister Asquith's speech, 'she chose her moment, and as he mentioned 'justice' she called out: "What about justice for women Mr. Asquith." and stood up, letting her long skirt fall down from where she had tucked it up round her knees under the long, loose coat, and taking off the cap, showing her hair.' 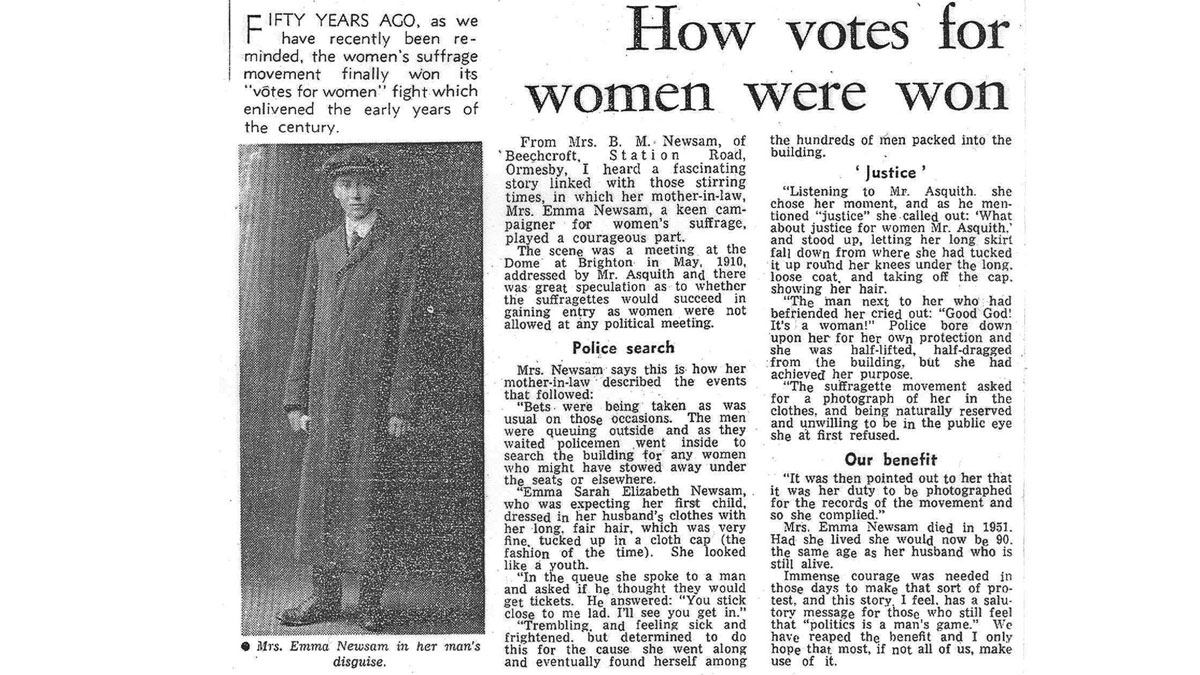 The suffragettes were predominantly members of the radical Women’s Social and Political Union (WSPU), set up by Emmeline Pankhurst in 1903. The suffragettes’ motto was “deeds not words” and to fight for the vote they waged campaigns of sabotage and destruction on public property across the country.

In February 1912 Emmeline Pankhurst declared that “the argument of the broken pane of glass is the most valuable argument in modern politics”. The suffragettes used toffee hammers to smash windows in prominent locations, making a political statement without endangering lives. They also burned post boxes, attacked paintings in galleries and placed homemade bombs in empty buildings in a co-ordinated attack on the public realm.

Among the 41 places relisted by Historic England for the events they witnessed in the suffragettes’ campaign for the vote are Manchester’s Free Trade Hall, where the militant suffrage campaign began and Epsom racecourse, where the renowned suffragette Emily Wilding Davison was trampled by the King’s horse when she ran across the racecourse during the Derby.

Find out more about Brighton Dome's history and heritage