To celebrate Heritage Open Days 2020 we are publishing a series of blogs researched and written by Brighton Dome's heritage volunteers. The blogs reveal the fascinating stories connecting Brighton Dome's history with the Royal Pavilion Estate and the city.

Brighton Dome was built between 1803 and 1808 and stands 65 ft high and 80 ft in diameter. At the time it was one of the largest domed structures in the world and was recognised as a remarkable feat of architectural design. Did you know that Brighton Dome isn’t the only circular shaped building located in the city? Domes have been a part of the city’s architecture since the Royal Pavilion Estate was commissioned by Prince Regent in early 1800s and many of the buildings are still standing.

From riding stables to a hospital to hosting Eurovision, Brighton Dome has been significantly versatile and this feature can be found in many of the other domes in Brighton too. Here are just a few of the domed structures that can be found in the city. You can use this list as a guide to find them when you are out and about.

Found on Eastern Terrace in Kemptown, this domed structure is currently a cabaret venue but has a history stretching back to the late 19th century. It was built in 1892 as a Mausoleum by Sir Albert Abdullah Sassoon, a member of a wealthy Jewish family from Iraq, for him and his families’ remains to be laid to rest. The bodies were removed in the 1930s after it was sold and it became an air raid shelter during the Second World War. Since then, it has largely been a bar and entertainment venue, with locals knowing it as the Bombay Bar, the Hanbury Arms and now Proud Cabaret. 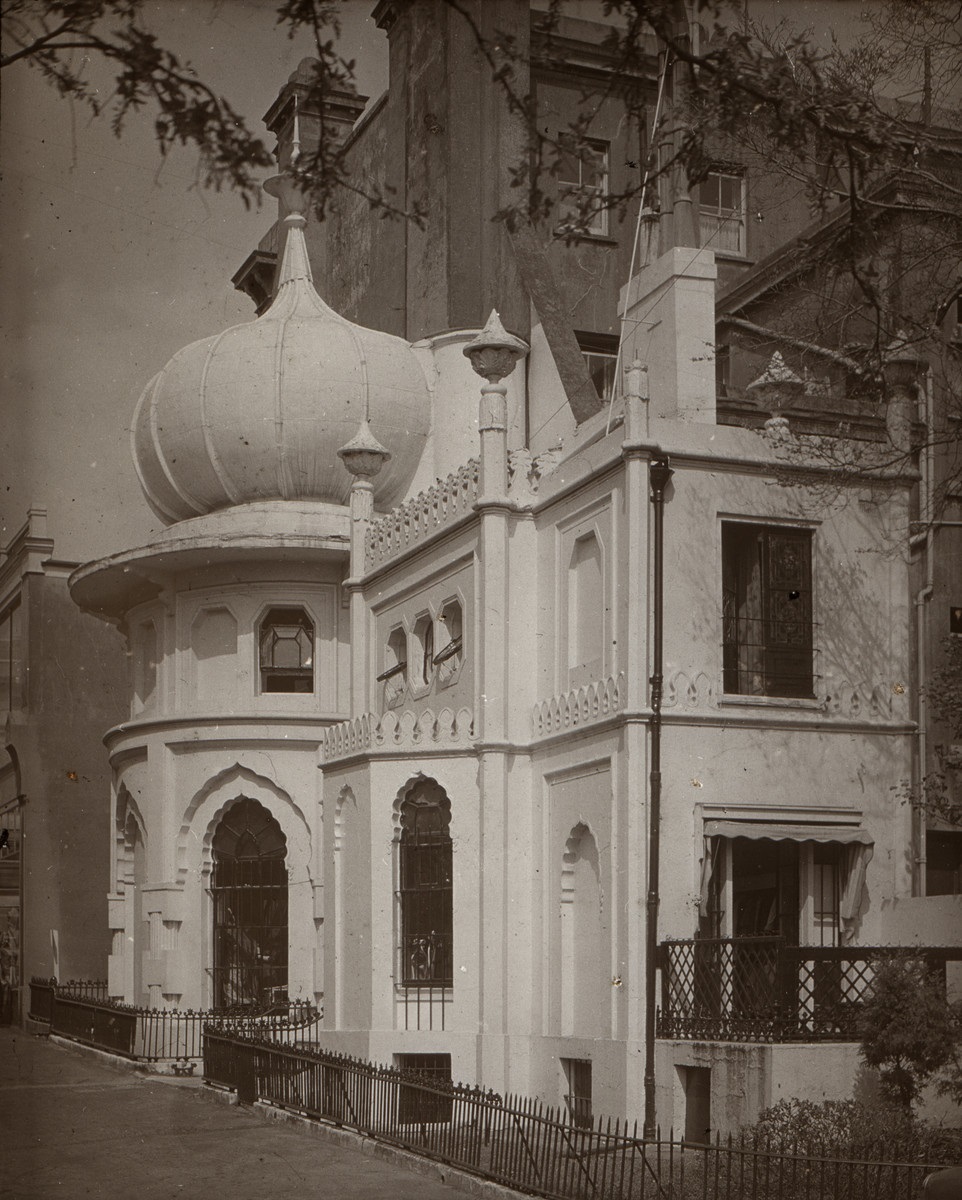 Just off Western Road is a house with a domed roof that looks completely out of place compared to the rest of the area. It was the home of Amon Henry Wilds, a well-known Brighton architect who wanted to replicate the style of the Royal Pavilion. Wilds and his father were both architects and both influenced by domes and oriental fashions. Other projects by Wilds included Oriental Place, Park Crescent and the Royal Albion Hotel. 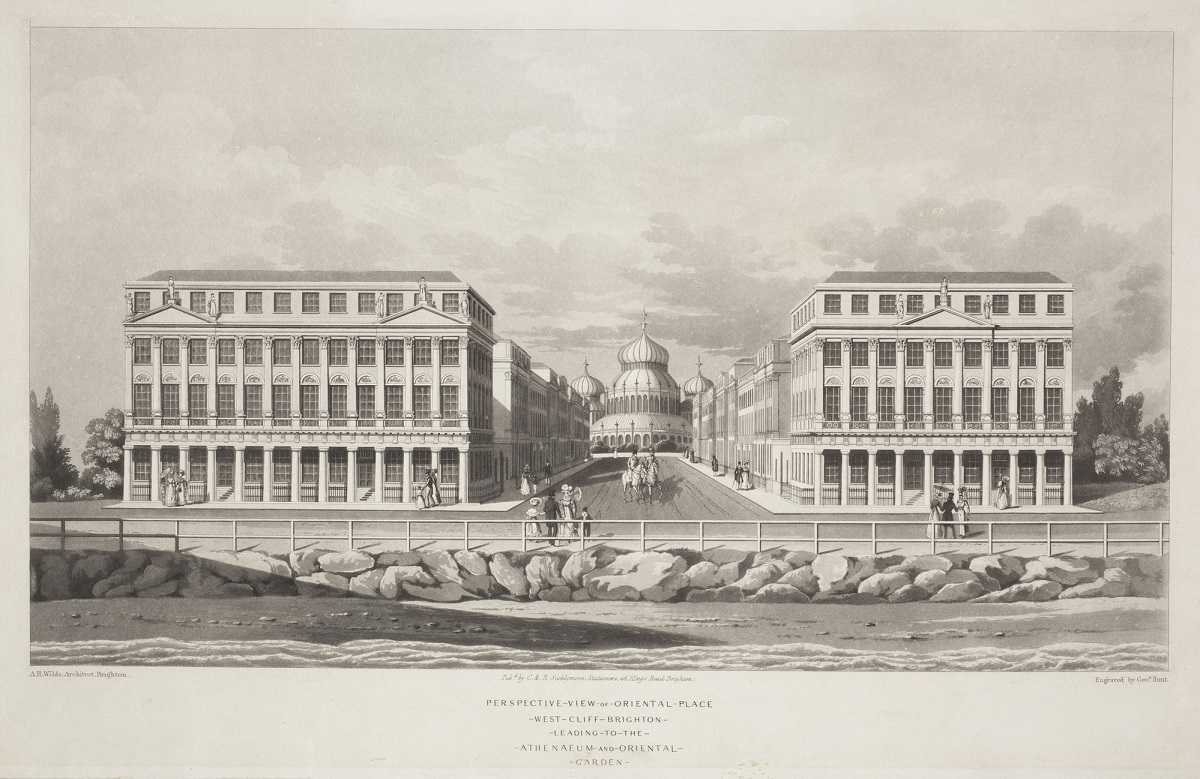 At the time, the Athenaeum on Palmeira Square was one of the most ambitious dome projects in the world. Designed by Amon Henry Wilds, it was the vision of botanist and landscape gardener Henry Phillips, who wanted to build a huge flower house similar to today’s Eden Project but with a dome bigger than St Paul’s Cathedral in London. It was due to open in August 1833 but unfortunately things did not go to plan.

Much like Brighton Dome, there were concerns that the Athenaeum would collapse when the scaffolding was removed. Sadly these fears came true and on the day it was due to open, the domed roof collapsed. Henry Phillips went blind with stress as a result and his dreams disappeared in seconds. 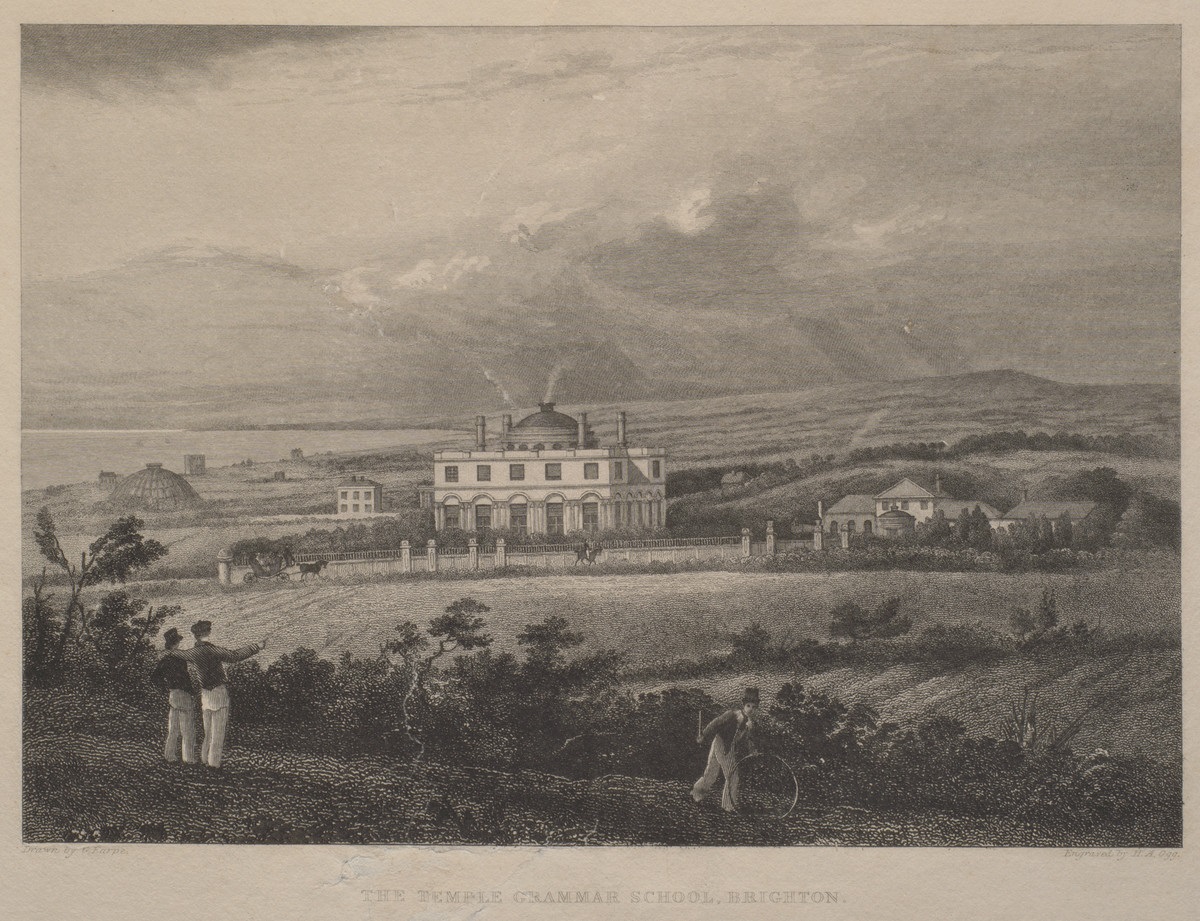 Thomas Read Kemp’s Temple was most likely built by Amon Wilds Senior, as he had designed many of Kemp’s other architecture projects. Kemp was the man behind Sussex Square and Lewes Road Crescent and Kemptown is named after him. The building was called ‘The Temple’ as it was similar in size to Soloman’s Temple in ancient Jerusalem. Originally designed as Kemp’s home in Brighton it became a boys’ school in 1828. Today the building is part of Brighton Girls’ School and while there is no sign of the domed roof, one of the buildings is named ‘The Temple’ in honour of the original building. 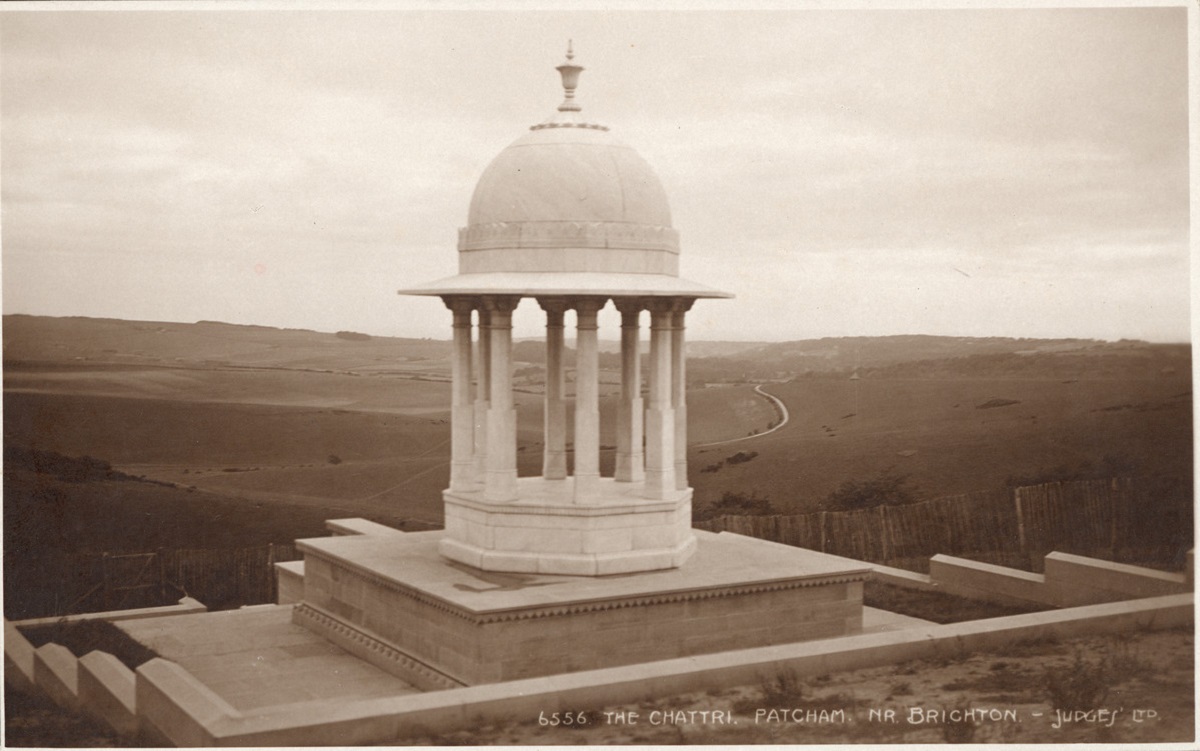 On the South Downs just outside Brighton is the Chattri, a domed memorial to the Hindu and Sikh soldiers who died in Brighton as casualties of the First World War. Many of these soldiers would have been treated at the Royal Pavilion Estate hospitals, which included the use of Brighton Dome’s Concert Hall, where over 4,000 men were cared for. The Chattri was designed by E.C. Henriques and means umbrella in Hindi, Punjabi and Urdu, which signifies the protection offered to the memory of those who died. 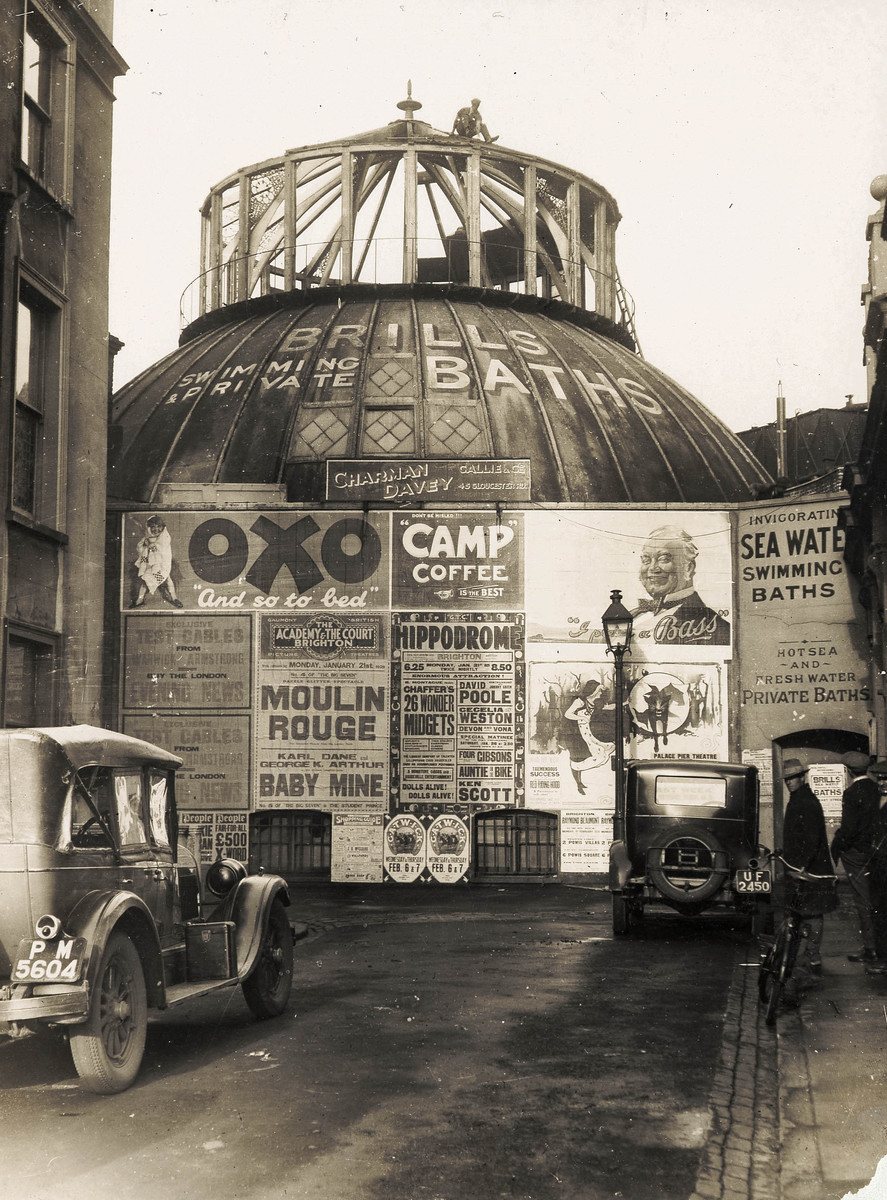 The dome style common in Brighton during the regency period was funded by the upper classes who streamed into Brighton as it became a popular seaside resort. Their arrival saw the rise of luxury past times such as private baths, with many popping up around the town. Brill’s Baths in the Pool Valley area was one of these, costing £90,000 and containing various baths, a barber’s and reading and billiards rooms. The circular gentleman’s bath was 65 ft in diameter, making it the largest in Europe at the time. Its popularity continued until the early 20th century and it was eventually demolished in 1929, making way for the Savoy Cinema.