Our Heritage Volunteers have been researching into the past to uncover stories of Brighton Dome’s role during the First and Second World Wars.

From 1916 to 1920, the Royal Pavilion Military Hospital operated as a facility for servicemen who had been injured during the First World War (1914-1918) and provided treatment, convalescence, and rehabilitation for over 6,000 veterans.

While recuperating, the soldiers had access to a wide range of entertainment and leisure pursuits and some of these are detailed in The Pavilion Blues, a monthly magazine founded by the hospital’s President of Recreations, Col. G. H. Brooke Coats, C.B., to cheer the patients and raise money for extra comforts. It ran until 1920, operating out of an office behind the stage in the Royal Pavilion’s Recreation Room, which is now the Music Room. 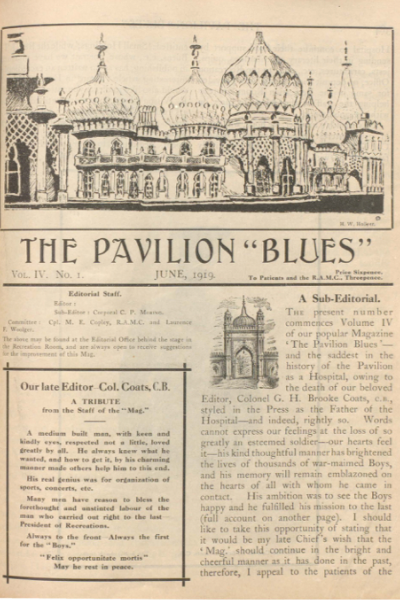 Soldiers were offered free seats at venues in the city, including the Royal and Grand theatres, the piers, picture halls and free deck chairs on the seafront. The Pavilion Blues expressed gratitude for these and other entertainments, declaring in the August 1917 edition that “everybody in Brighton and Hove is wonderfully good to our Pavilion Boys”.

The magazine also records drives to explore the city’s surrounding areas, funded by the Mayor of Hove and private individuals. 60 patients were taken to Billingshurst where, “Mrs Keith Arbuthnot very generously provided them with tea and amusements on their arrival there, and as usual, gave them a ripping time”. Brighton cab-owners drove soldiers to Falmer and other destinations included Bramber and Arundel Castle.

Organ recitals, which “helped very considerably to lift us out of ourselves,” are frequently mentioned and other musical offerings were varied, catering to all tastes. The Theatre Royal put on a show with opera singers and there were regular performances by the Canadian Battalion and Hussars Bands. In August 1917, the contralto, Miss Leonora Radcliffe made a tremendous impression with her rendition of When You Come Home.

Theatre events were also popular. The Hippodrome manager, Mr. W. H. Boardman, organised a concert in the Recreation Room in July 1917, featuring Petite Nina who presented “a novel attraction, with her motor-cycling sea-lions”. The “bumper programme” also included the lovely contralto voice of Miss Norah Desmond along with other London artists. Another “unusually happy afternoon” was spent at a variety show put on by the Half-Past Eight Company at the Theatre Royal. The Blue and White Concert Party, made up of patients and staff including the chaplains, also put on regular shows with music, comic turns, singing and recitations.

Sports, to the “surprise of the outside public”, were very much part of the programme on offer to the recovering soldiers and included cricket, football, bowls, croquet, and Sussex Stool-ball. For the less mobile, there were whist drives and games of draughts. Gymkhanas on the “Western Lawn of the grand old Pavilion” were an annual event held for hundreds of visitors and patients featuring egg and spoon races, tug of war, chair races and three-legged races.

Royal visits were much appreciated, with Queen Mary, along with Princess Mary and Prince George, attending on 9 August 1918 were shown around the facilities in Brighton Dome and the Corn Exchange, where they spoke to many of the patients.

As the archive of The Pavilion Blues magazine demonstrates, Col. Coats as President of Recreations was tireless in organising a huge variety of activities to keep the soldiers entertained during their stay at the Royal Pavilion Military Hospital.

Join us on Sat 6 Nov for a day of free activities exploring wartime memories of Brighton Dome. Find out more here.