Inspired by Marc Almond & John Harle’s upcoming gig, we took to The Lanes to examine Brighton’s haunted past

On the fifth of March, we’re rather excited to be welcoming Marc Almond, of Soft Cell fame, and John Harle, to Brighton Dome. The legendary duo will create a soundtrack of theatrical, classically influenced electronic music, over which they look to explore the gruesome history of London with their latest album The Tyburn Tree. The title refers to the famed gallows, that for six centuries were the execution site for England’s most notorious criminals, ranging from murderers and highwaymen to traitors and rebels. Marc and John will take you on an atmospheric, sometimes shocking musical walk through the London streets and among London’s ghosts, dipping into tales of murder, execution and more.

This got us thinking, London’s not the only city with a dark and ghostly past, we’ve all heard stories about this quiet seaside town… So, we sought to discover what we could about Brighton’s own murky history. A quick call to Brighton’s premier Ghost Walkers meant that at half past seven on a dark, windy Tuesday night, we were an audience to Silas, the nom de gurre of our tour guide, who in lavish Victorian garb took us on a tour of the Laines in order to chase down the local ghost and ghoul community.

Wondering through the various inlets and twittens of the South Laines in a bid to unveil Brighton’s spooky past we were introduced to the apparitions of various miscreants of Brighton’s history. We were told of the spirit of Maria Fitzherbert, unofficial wife of King George IV, whose spirit remains in the YMCA along the Old Steine, of unearthly spectres within Dr Brighton’s, and an amorous apparition that remains an overfriendly accompaniment to many a woman’s walk down Black Lion Lane. We were toured past the Town Hall, where a spirit of a troublesome phantom Friar still lingers, into the Northern Lights where we indulged in a shot of Fisherman’s Friend flavoured Vodka to compliment the buildings history as a fisherman’s supply shop, and visited an obligatory site of Jack the Ripper’s spirit, whose presence remains in his old – ahem – haunt, The Cricketers. What lies beneath are two stories discovered on this tour that provide a spooky insight into Brighton’s past. If you scare easily, look away NOW. 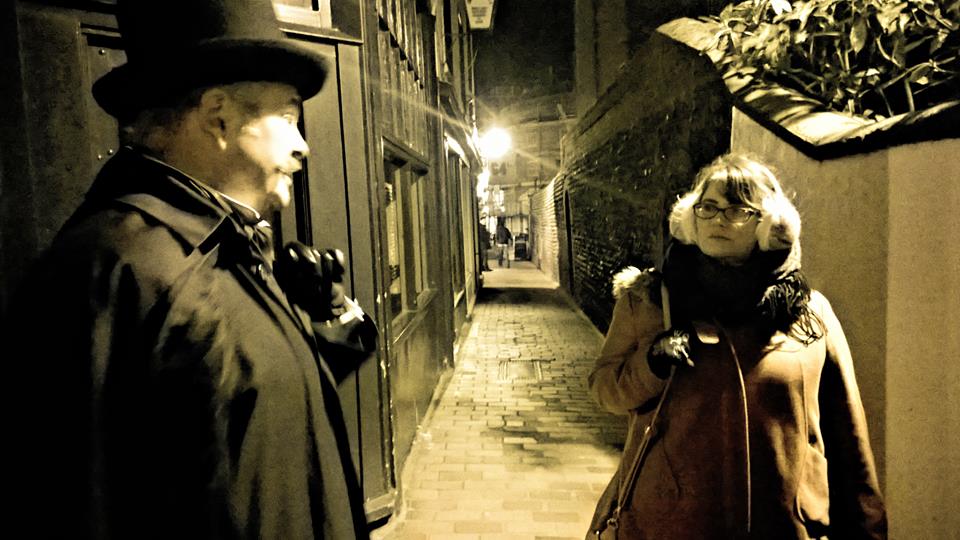 On the Ghost Walk led by Silas (above)

Bartholomew Square today is haunted by local bureaucrats fretting about catchment areas and hungry locals spilling ramen over pages of The Guardian in Moshimo. Yet long before either of these Brighton institutions existed, the site was home to St Bartholomew’s Priory. Positioned in the heart of what once was fishing village of Brighthelmstone, the Priory was home to many nuns, who became victims of pirates and smugglers as our stretch of coast line became increasingly used for illicit ends. This became such a problem that soldiers were soon stationed nearby, hoping to halt the rising smuggler trade and protect residents, including the nuns of the priory.

Brighton Town Hall located on St Bartholomew Square(above) is also the site of a grizzly murder. Join the Ghost Walkers to find out the full and gruesome details.

It is a truth universally acknowledged that no woman can resist a man in uniform, and regardless of the wrath of our lord the residents of St Bartholomew’s were no exception. Such was the love between one nun and a soldier, that they soon laid plans to desert their respective posts and elope, choosing a life of shame and slander over honour and spiritual fulfilment. Unfortunately the lovers were caught, and the nun had to face up to both the wrath of the Lord, and more pertinently, the wrath of her senior sisters. Her punishment, it was deemed, was to be entombed within a small room of the grounds of the priory and left to suffocate – a common method of capital punishment as it was seen to absolve an individual of a murder, whilst ensuring that the job was done properly. In Silas’ own words, ‘her wails and moans must have been heard long into the night as the walls of her tomb grew ever higher’. Yet although she was certainly shuffled off this mortal coil, there have since been reports of apparitions and ghostly sightings of a woman around the boarded up passageway between Brighton Place and Meeting House Lane. Silas hypothesised that this might have been the intended meeting point for the two lovers, and the area is now haunted by a displaced spirit still searching for her lost soldier. We were told of many sightings of ghostly women including once, during a blackout in WWII, where a fire warden described stumbling upon a woman drifting down the lane towards her, before disappearing into the bricked up passageway.

The Sightless Spectre of the Old Steine

Another spectral display we were treated was prompted by a visit to the Old Steine, home to one of the more macabre of our celestial cohabitants. During the regency era, it was very much a case of see and be seen at the Brighton Steine, as members of the aristocracy would promenade up and down the road in the finery. However, amongst this resplendence lurked the ghost of John Robinson, a soldier and adventurer with an uncanny resemblance to the Scarlet Pimpernel. A mercenary by trade, Robinson fought in a range of wars before backing the wrong team in the Persian Civil War. The opposing commander ordered his troops to claim 20,000 pairs of eyes, and Robinson was one of the unfortunate mass of soldiers blinded and gouged at the behest of the victorious Agfa Muhammad.

Unable to earn a living, Robinson took to the streets of Tehran, where after many years he was discovered by a friendly merchant, who assisted the soldier in the long trip back to Brighton. It was not long after his arrival in Brighton that Robinson keeled over on the Steine to breathe his last. In Silas’ words ‘those who saw him stood aghast at the sight of his horrifically mutilated face which, it is claimed had maggots feasting on the putrefying flesh’.

However, that was not the last sighting of Robinson. Since his death there have been various documented encounters. A police officer, upon trying to help a drunk stand upright in the street, turned him round to discover ‘a festering mask of decomposing flesh’, making the officer physically sick. Following this, he turned to approach the man, only to find he had completely disappeared. A while after, a woman returning home from the theatre was hospitalised after fainting in the street, where she recounted that the last thing she was an eyeless ghostly form.

If you too want to explore Brighton’s darker side then be sure to try the Ghost Walk of the Lanes and enjoy an evening of delightfully delivered ghoulish accounts. The walk includes eight, exquisitely told macabre tales of murders, hideous apparitions, boisterous poltergeists, wandering nuns and Brighton’s infamous Jack-the-Ripper connection. 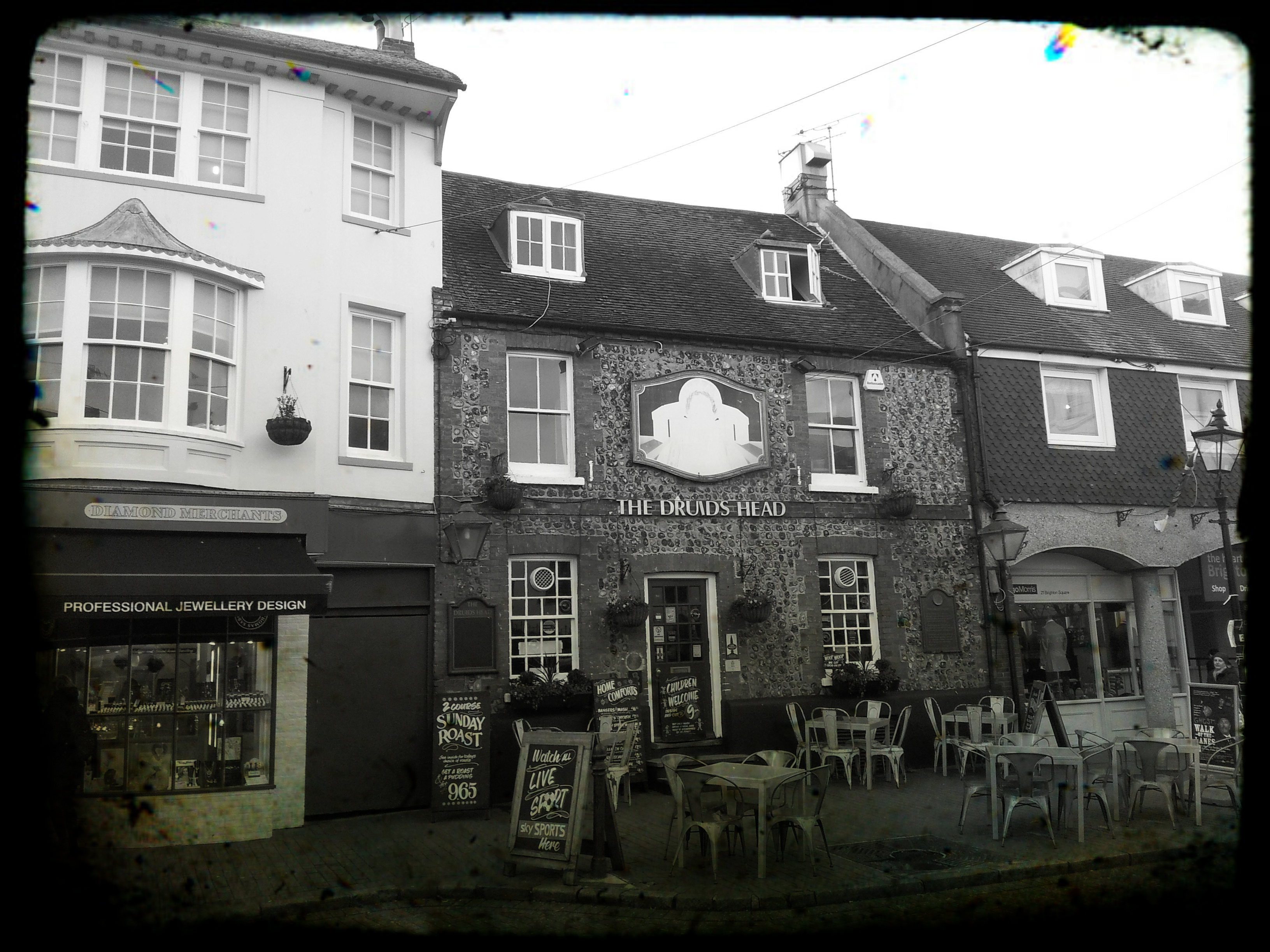