The 200 to 300-year-old remains of 18 individuals, discovered during redevelopment work at our Corn Exchange on the city’s Royal Pavilion Estate last year, have been laid to rest at the Memorial Cemetery, Woodingdean.

The remains, which were found underneath the area formerly used as the venue’s mini conference room, were from 'Quakers’ Croft', a Quaker burial ground that existed before the Royal Pavilion Estate was built.

Following the discovery last year, the remains were carefully excavated from the Corn Exchange site and taken to the Archaeology South-East office where they were cleaned and studied in detail by the osteological team before being returned for reburial. Small segments of selected remains were archived for further examination and research.

Dr Paola Ponce, the osteo-archaeologist who worked at the excavation site, gave a moving tribute in a ceremony attended by local Friends and representatives of Brighton & Hove Council, Brighton Dome & Brighton Festival and the archaeology team.

Vivienne Ross, an Elder at the Brighton Quaker Meeting said: “To be at a Meeting for our distant friends was an honour. Our predecessors whom we are laying to rest, with the connections and insights of their historical past discovered from our archives gave us an emotional link to the past. The acknowledgements by representatives from Brighton & Hove City Council and Brighton Dome & Brighton Festival joining with us confirmed the importance of this historic event.”

The first permanent Meeting House was established in Brighton in 1700, a converted malthouse on the corner of New Road and North Street. The meadowland behind the meeting-house was let and known thereafter as Quakers’ Croft, and a smaller piece at the Spring Walks (Church Street) was used as a burial ground. This land was purchased by Prince of Wales in 1804. In 1805 the Quaker meeting house moved to its current location in Meeting House Lane. 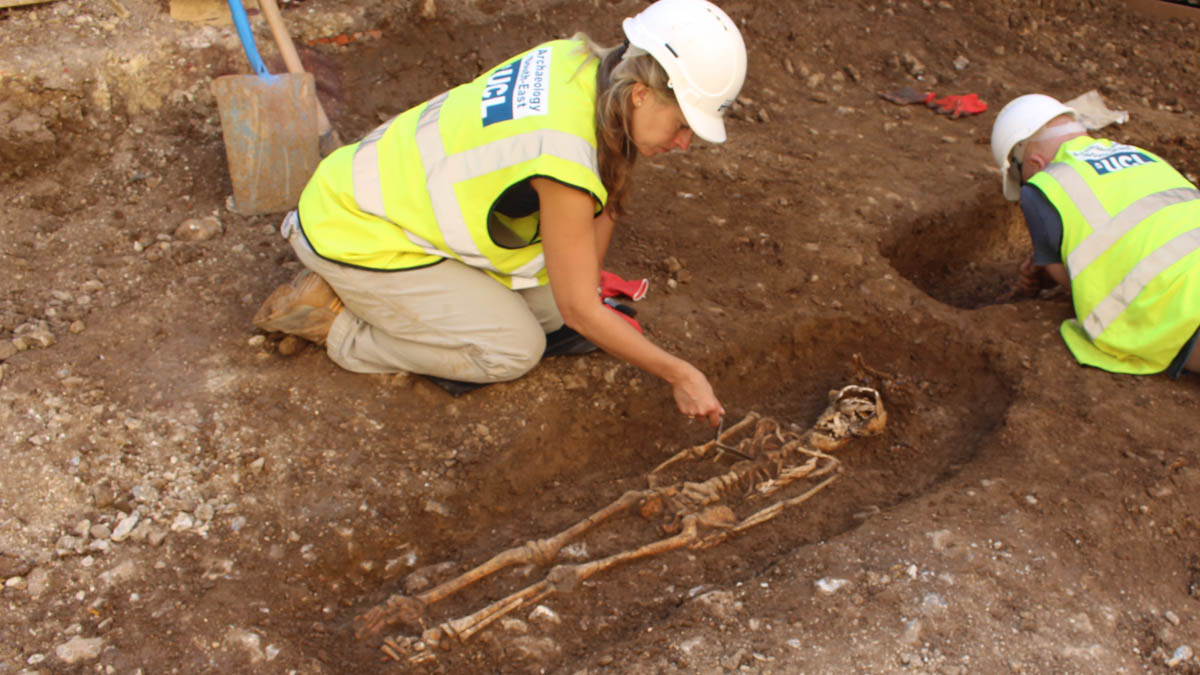 Find out more about the original discovery via our News & Blog page.

The first recorded burial at the Quaker’s Croft site was in 1702 and subsequent research into the Brighton Quaker archives has so far established that 75 individuals were buried there during its usage. Amongst the occupations of the listed friends are carpenter, labourer, schoolmaster, draper, wine merchant, brewer, coal merchant, banker, miller, confectioner, corn merchant, mariner, blacksmith, basket maker tailor and grocer.

Andrew Comben, Chief Executive, Brighton Dome & Brighton Festival, who attended the ceremony said: “It has been a privilege to work alongside Archaeology South-East and the Brighton Quakers throughout and to participate in this dignified and sensitive ceremony. The discovery of the burial site has opened up a fascinating chapter in the history of Brighton and of the Royal Pavilion Estate. We are grateful for their sensitive handling of this discovery and the invaluable information that they have been able to uncover.”

Alan Robins, chair of BHCC’s Tourism, Development and Culture Committee said: “The discovery of the burial site is a reminder of the lives lived by some of our earliest residents. I’d like to thank all those involved in creating this week’s dignified ceremony to commemorate our Quaker friends and the contribution they made to the city’s rich cultural history.”

The work at Brighton Dome Corn Exchange is part of an ambitious project to restore and reunite the Royal Pavilion Estate buildings and gardens. Phase one of this project - a major refurbishment of the Corn Exchange and Studio Theatre - will restore long-lost heritage features as well as provide new, state-of the art facilities.

With 90% of Phase One funding now in place - including significant donations from the National Lottery through Arts Council England (ACE) and Heritage Lottery Fund (HLF), and the Coast to Capital Local Growth fund - a Community Appeal is currently underway to raise £250,000 to help complete the transformational project. Discover more at build.brightondome.org

Continue Reading
close
Help us continue doing what we do best