Make like a Mod or roll like a Rocker? A brief history of the cultural clash that took the 1960s by storm

With Duckie polishing their Lambrettas, donning their Parkas and ensuring their leather jackets are correctly studded, we thought we’d turn our attention to Mods and Rockers before Duckie arrives in town for Brighton Pride this weekend. See our handy How to Dress Like a Mod or Rocker Guide to get your look just right for this weekend's clubbing extraganza! Read on to discover more on the inspiration behind Duckie's night of performance mayhem...

By the late 1950s the rationing of the war was over, a new affluence saw a lift in Britain’s fortunes and many of the kids had jobs and an income all of their own for the first time. The teenager was born and they started to stamp their collective little feet and develop a new identity with sub-cultures unique to them. The Teddy Boy raised its adolescent head and could be credited with being the parent of both the Mods and the Rockers.

Mods – originally called so because they listened to modern jazz in the late 1950s (although later associated with ska, R&B and soul) took the dandy side of the Teddy Boy identity.

The Mods adopted the crisp tailored lines of Italian style gurus wth their slick box-cut suiting - denim was not for them - far too down-market! Drainpipe trousers, three button jackets and crisp pocket handkerchiefs were de rigueur. Sometimes they had ankle-skimming trousers, showing a gap of white sock to then emphasise their footwear. Branded items by Fred Perry or Ben Sherman were teamed with union-jack jackets, giving a bespoke look within the Mod’s style framework.

Their penchant for artfully designed Italian items extended into their choice of transport… the Lambretta. Even this had to be accessorised with chrome crash bars and mirrors. Riding apparel included the Parka, with or without a fur trimmed hood. These polished individuals would hang around in coffee bars whereas their opposites, the Rockers were more pub-based.

Rockers considered the Mods to be far too foppish. 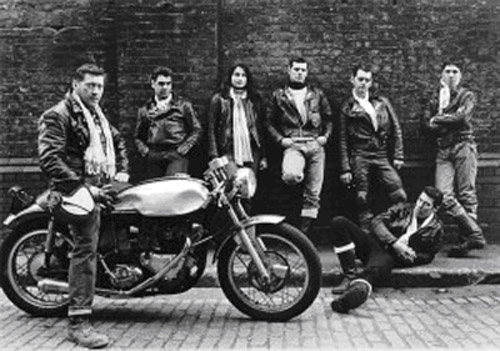 Rockers retained the gritty rock style of Teddy Boys but with a heavy influence from the American Rock scene and movie culture. Elvis, Marlon Brando and James Dean were all icons of the style; holding onto the looks of the late 1950s - denim, black leather jackets and brothel creepers. Rockers would not be seen dead on a scooter – they drove bikes, real bikes.

Rockers were known as Greasers partly from their motorbikes, but also partly from the dressing in their elaborate hairstyles. The quiff at the front the head was balanced out with duck’s ass at the back, a style that would need a lot of Brylcream to keep it in shape; a look that contrasted with the simple styles of the Mods.

Both clans were predominantly masculine, but not exclusively. The female Mods cornered the market in deep dark eye makeup with little lipstick going for an androgynous look that would be capitalised on and refined by Twiggy in the mid 1960s.

It’s all about the tribe, which tribe are you?

Being a member of one of these groups is all about belonging, not necessarily in opposition to the other group. However one group was pitted against the other in the run up to the Whitsun holiday - minor clashes had happened before - but on the bank holiday large numbers of both Mods and Rockers descended on Brighton and the rest is… as they say history! Images of deckchairs being broken up and hurled down from the prom onto the enemy abound, but there are tales of the fighting being staged for the camera. Talking to some who were there they claim that they absolutely hated each other. There was undoubtedly some violence but it was not always Mods against Rockers – the Mods were fighting amongst themselves, South London against North London and so on.

You can tell what the British Press thought of them at the time, the image below was captioned ‘devil deviants!' 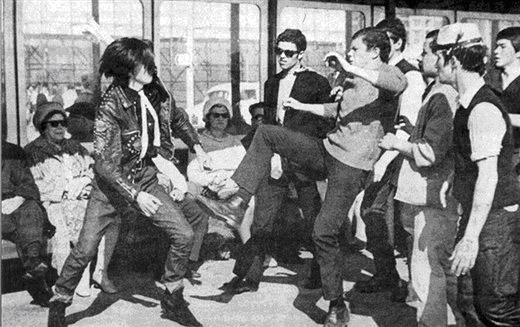 If you want to be dressed correctly, ready for when Duckie climb onto their bikes to roll into town then take a look at the 1979 film Quadrophenia for a spot on guide to the styles of yesteryear.

In true Duckie style take a stroll down East Street, as you stumble upon Paperchase and Indian Summer, you’ll need to keep you eyes peeled for the famous (or infamous) alleyway… Please exercise a little Duckie decorum and do not reenact the scene shoot there but meet us in our makeshift alleyway in our Corn Exchange where a dozen Lesley Ash clones await you.

Click on the image below to help choose your all important outfit and side for this weekend's Duckie extravaganza!