An interview with earsthetic artist in residence Sarah Nicolls

Experimental pianist and earsthetic’s first artist in residence Sarah Nicolls discusses the creation of her ‘Inside-Out Piano’ and the development of her new piece Moments of Weightlessness, which pushes the boundaries of what a piano can do…

How did you get into experimental piano playing and composition?

I started playing contemporary classical music in my postgrad year at the Guildhall. I discovered I had a knack for quick learning and enjoyed the human interaction of playing for living composers. I also loved the sounds that could be made in new music: things were allowed that were far from traditional classical music. Gradually over the following few years I focused increasingly on this music, getting more and more interested in piano pieces that also used electronic sound and multimedia presentation (pieces with video or live visuals). In 2005 I joined a band with Mira Calix and David Sheppard where we made our own music and this began my discovery of improvisation and composition. In 2008 I built the first Inside-Out Piano and because it was also back-to-front (!), I had to find a new way to play. This informed the music I make now, which I’d describe as lyrical with an experimental soundscape.

What does ‘preparing a piano’ mean? Why do you do it?

Basically it means to stick things between the strings, so that the piano sounds different, hopefully interesting, rich, strange or beautiful!

Trailer for Moments of Weightlessness from Sarah Nicolls

Who/what are your inspirations?

I’ve seen a lot of amazing theatre shows which have inspired me to try something more theatrical with the piano - particular shows by Kris Verdonck, Pina Bausch and Kira O-Reilly stand out. Musically, Phil Jeck’s Will Mowe textures are extraordinarily ecstatic, there’s one very addictive track by Fridge, I love the paired-down triads of Laurence Crane and Steve Martland but also the totally up-to-date drama of Jenny Walshe’s visceral live performances.

What is it about earsthetic that made you want to be a part of it?

earsthetic celebrates music with a visual element and for me, that’s the best of both worlds. I’ve spent a few years really diving into live electronics and how they are performed, for example, and I’ve had to face up to the fact that, for me, it *is* all about how the performance is conveyed - what the interaction with the audience is. Theatre as a medium seems very rich to me and I’m trying to explore that a bit.

During earsthetic, your fully interactive Inside-Out Piano will be installed in our Café-bar. What motivated you to create this instrument?

I had two basic motivations: to play ‘inside’ the piano more easily (i.e. on the strings) and to let the audience see this. I’m also hoping ultimately that the I-OP will be the best kind of grand for modern homes, as it will hopefully end up with the footprint of an upright...

How has the public responded to your Inside-Out Piano?

It hasn’t been installed before, so Brightoners - get out and play it while you can! But in general, when people see the piano, especially doing its tricks (I won’t give it away…), they just say ‘wow’, a lot!

You’re currently developing your piece Moments of Weightlessness at Brighton Dome with a specially designed second Inside-Out Piano. What extra characteristics does this one have?

That would be telling but suffice to say it might seem weightless at certain moments...

How are you exploring the subject of your journey into motherhood as part of the piece?

Currently I’m throwing everything up in the air (metaphorically and sometimes literally!), to see what sticks. Recently, I’ve been ‘feeding’ socks to the piano strings… I’m fairly far from my comfort zone so it’s challenging and stimulating. How much we pare back to the music and metaphor will remain to be seen. 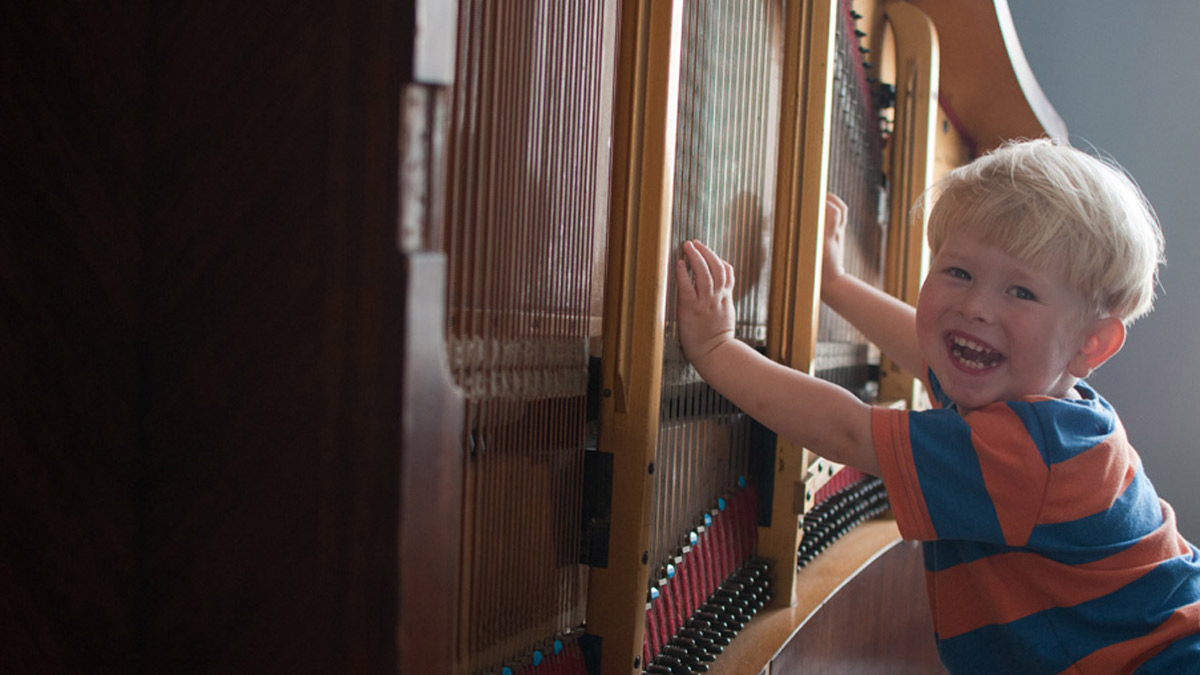 You can play Sarah’s Inside-Out Piano from Mon 8 - Sat 13 Dec. Plus, see her astounding live performance Moments of Weightlessness on Wed 10 Dec.