Marking the 400th anniversary of Shakespeare’s death, the performance focused on James Orchard Halliwell-Phillipps, a 19th-century joker and world-renowned Shakespearean scholar who lived on the outskirts of Brighton. There in his 'rustic wigwam' (a series of conjoined sheds), he obsessively curated a huge hoard of Shakespearean rarities.

The unique promenade performance took place in the Roedale Allotments, close to the site of the eccentric recluse's former home, and imaginatively involved Allotmenteers, the Hollingbury Park Bowls Club and a group of young performers. Audience members explored sheds and hideaways, discovered Shakespearean characters reborn in knitted form and quotes featuring herbs and plants from each of the twelve Shakespeare plays, and gathered a wealth of horticultural tips along the way

This exhibition celebrates the intricate craftwork of these woollen Shakespearean characters by Annie Hardy – can you guess who they are? Pure Evil’s artwork was commissioned to feature on two specially built sheds which journeyed through the Allotments with the audience.

Creator and curator, Marc Rees is one of Wales’s leading exponents of contemporary performance and installation. His innovative interdisciplinary artworks are known for their eccentric, funny and often extreme interpretations of history, culture and personal experience. Marc has lived and worked in Amsterdam, Montreal and Berlin and has created several successful projects under his company R.I.P.E (Rees International Projects Enterprise).

Marc can be compared to an archaeologist; exhuming the multi-layered history of a site, unearthing fragments (of fact or fiction). He examines these findings in detail then works with artists, performers and the community to deduce, interpret and re-imagine. This re-discovered material is then moulded into a composite portrait for an audience to encounter as an immersive experience.

Born Charles Uzzell Edwards in South Wales in 1968. He grew up surrounded by art thanks to this father, Welsh painter John Uzzell Edwards. Studying graphics and fashion in London, he initially moved to the West Coast of America producing t-shirt graphics. Street art proved to be Pure Evil’s most important artistic discovery throughout his ten years in the U.S. Back in the U.K the artist began working with the people involved in Banksy’s ‘Santa’s Ghetto,’ and he started to create prints for Pictures on Walls.

When denied re-entry to the U.S he began working in a small shed in the Black Mountains of Wales. In 2006 he moved back to London and held his first Pure Evil exhibition. The popularity and success of these shows enabled him to open the Pure Evil Gallery in Shoreditch in 2007, and the nearby Department Gallery in 2014.

'Annie lives in Laugharne, Carmarthenshire which according to Dylan Thomas (the township’s most infamous son) is the strangest town in Wales and he was right. I was developing a project for National Theatre Wales; a reimagining of ‘Under Milk Wood’ so was keen to immerse myself in the town and its community and what better place to start than Dylan’s beloved Brown’s Hotel where he would evesdrop on the town’s comings and goings.

I met Annie there over a pint of ale and she rather sheepishly confessed that she was knitting her way through all of ‘Under Milk Wood’s’ characters, she showed me images on her phone and I was bewitched, they were extraordinary so I used them in the Laugharne show.

When I realised that we couldn’t use real actors for ‘Digging For Shakespeare’ I knew that his characters had to be reborn in knitted form so I commissioned Annie to create 12 key figures and this is what she did, spending between 30 and 50 hours lovingly creating each figure .

I’m sure you’ll agree that their are wonderful, such attention to detail and all from her imagination.

I shall miss them, goodbye dear friends.' - Marc Rees 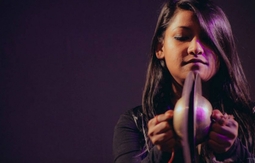 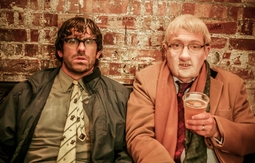